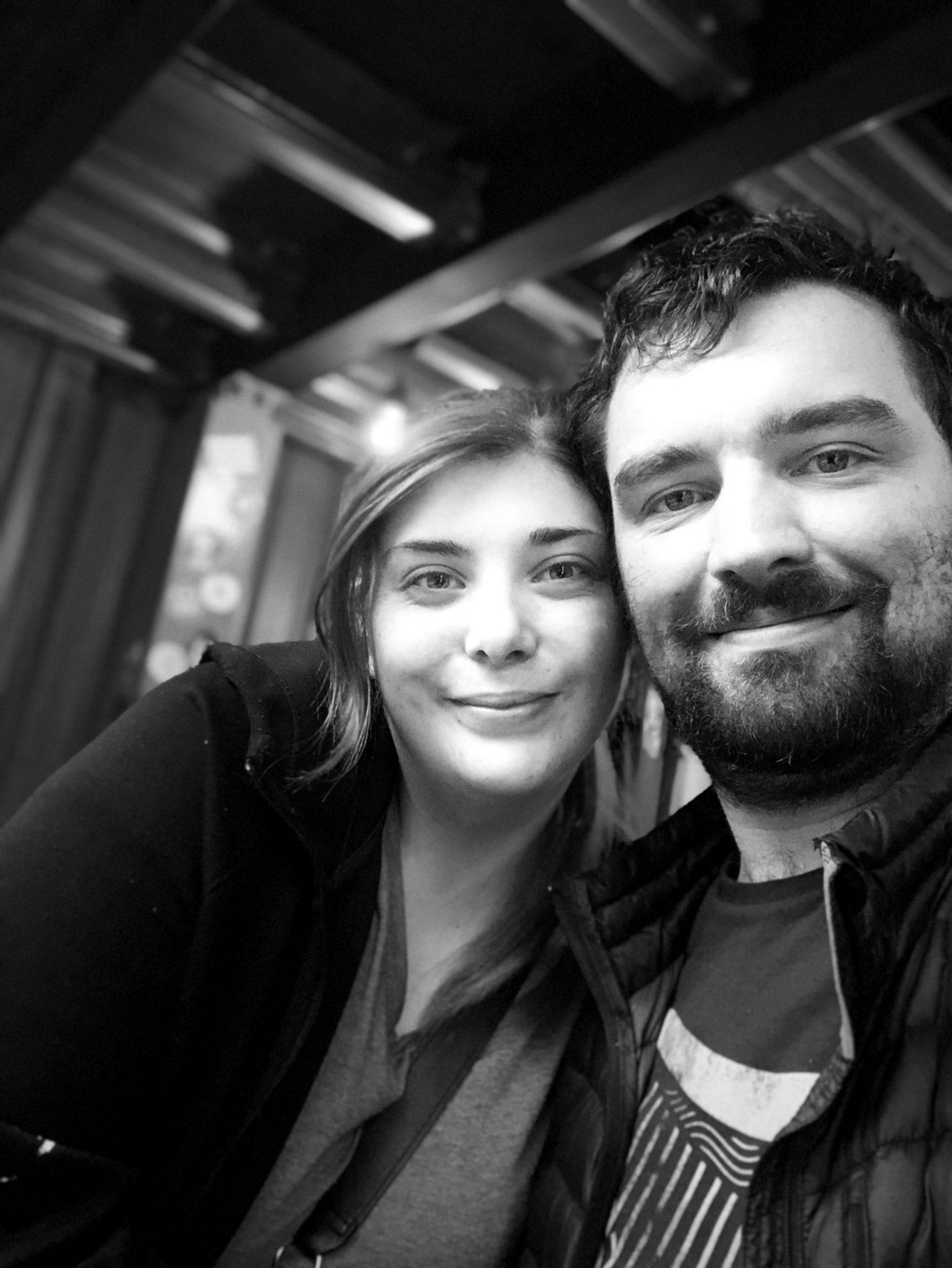 August has been a whirlwind of a month. So much has gone on but it also feels like it’s gone so quickly and barely anything has happened? I honestly can’t believe it’s September at the weekend. As you may have seen elsewhere on my social media, Rob and I have been getting ourselves ready to move in together.

WE MOVED IN TOGETHER!

I feel like I’ve been droning on about moving in together for months. It felt really strange not having a super strict deadline to move out by. The end of my tenancy is in the first week of September, but we began moving my stuff across slowly in July. Taking this longer, more relaxed approach to the move I think was our saving grace. It just felt a lot more relaxed! But at the same time, we also had to gut the house of rubbish and redecorate.

Moving in together- Redecorating the bedroom

I have to admit I secretly really enjoyed this part of the process. Spending hours on Pinterest looking for Bedroom Inspo, searching IKEA for furniture and decor and forever asking Rob if he preferred six shades of grey that all looked the same to him.

In the end, we decided to go for a more grown up colour scheme than we originally planned. Downstairs, in the living room there is a black and white theme. I love it as it gives us such a good base for adding accent colours and changing things up! This was something I wanted to carry on upstairs, and I adore grey and white. Fortunately, Rob just wanted to get the job done and let me make most of the decisions. 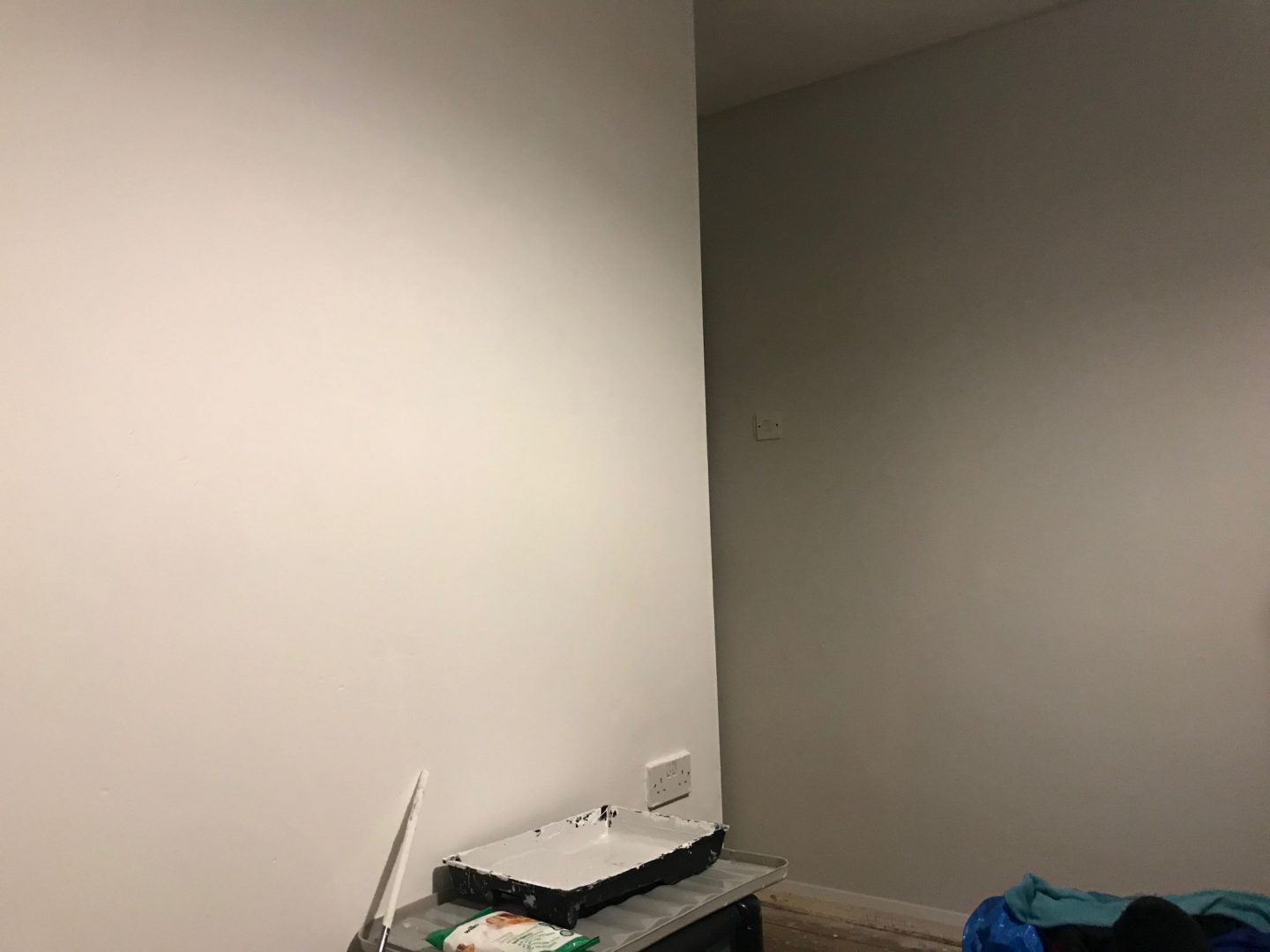 We started off with the palest of pink walls, which had layers of other colours behind it. We had to scrape it all back to the plaster using a wallpaper steam stripper. This little machine was a godsend! We started scraping the walls by hand and I just could not handle it. We were scraping the walls around Rob’s shifts at work and it took almost a week to get any serious amount of work done.

We moved onto painting the walls with basic white emulsion. Three coats later and the walls were ready for some colour. In the end, I chose Polished Pebble Silk by Dulux. We were originally going to paint the entire room in this colour, but we were toying with the idea of a feature wall. So, my top tip in this scenario? Paint the wall you’d have as a feature wall FIRST and step back for a day or so and see if you like it. We did and decided to leave it that way. I love the slight difference in colour. Polished Pebble is a very light grey, and the Silk formula reflects a lot of light. Alongside the white walls, the bedroom looks so much bigger than before!

Sundays have always been our day together. Rob’s one day off, and the past few have been all about getting ready to move in together. It’s been an interesting change but given us even more of a reason to pop out on a Sunday night to celebrate the weeks hard work!

The night the painting was all done, we laid down in Rob’s old bed to go to sleep and I just remember letting out this massive sigh of relief and happiness. The majority of the hard work was over. I had already brought over a few things and it was the first time that the space felt like OURS. It’s such a wonderfully, peaceful feeling. Especially for someone like me who is so used to year-long accommodation. I finally have a home, with the man I love. I cannot tell you how happy this makes me.

I’ll be uploading more photos of the bedroom and the house as the unpacking process finishes! I can’t wait to show you the progress we’ve made.

Moving in together- Moving Out of my flat 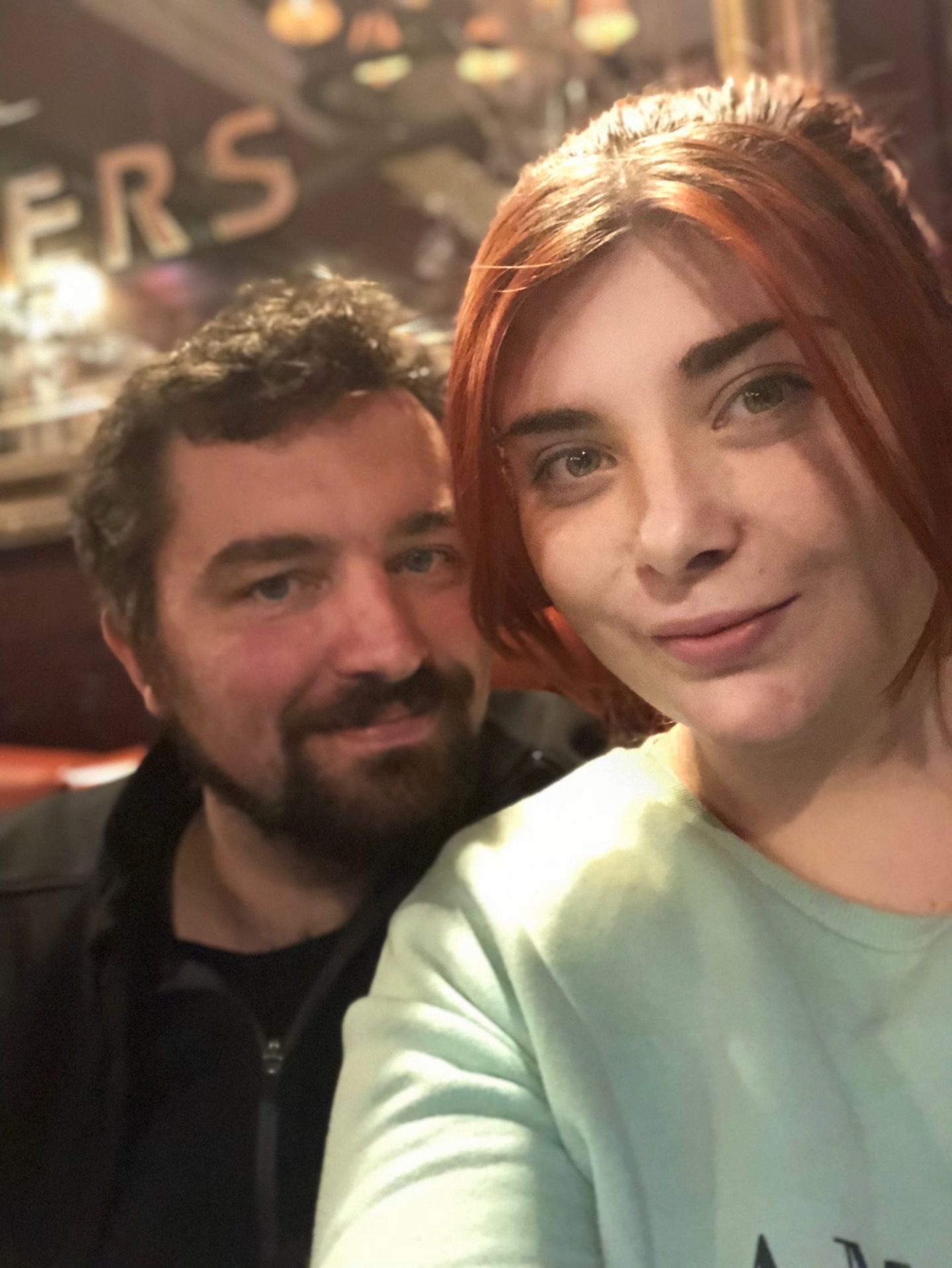 Bank Holiday drinks celebrating moving in together with friends.

With a helping hand from the lovely Melissa, we got all my stuff packed down and moved across to the house. Two van trips back and forth and it was all moved within a couple of hours.

Fortunately, we had done all the big furniture shopping last summer when I moved out of student halls into a private flat.

We already had a double bed that I wanted to keep, bookshelves, chest of drawers and lots for every other room in the house. I even managed to get us a bargain on Facebook Marketplace for some bedside tables! Meant to be £90 new for two, I got the pair for £20! Bargain, and we didn’t even need to build them!

Moving in together has been quite exciting! Rob arranged his annual leave so we could make the most of the time together and get the house sorted. It’s kind of been like being on holiday together! It’s definitely the longest time we’ve spent together and it has been so nice to have lazy lie-ins, build furniture together and go on day trips.

Moving in together- So What Now? 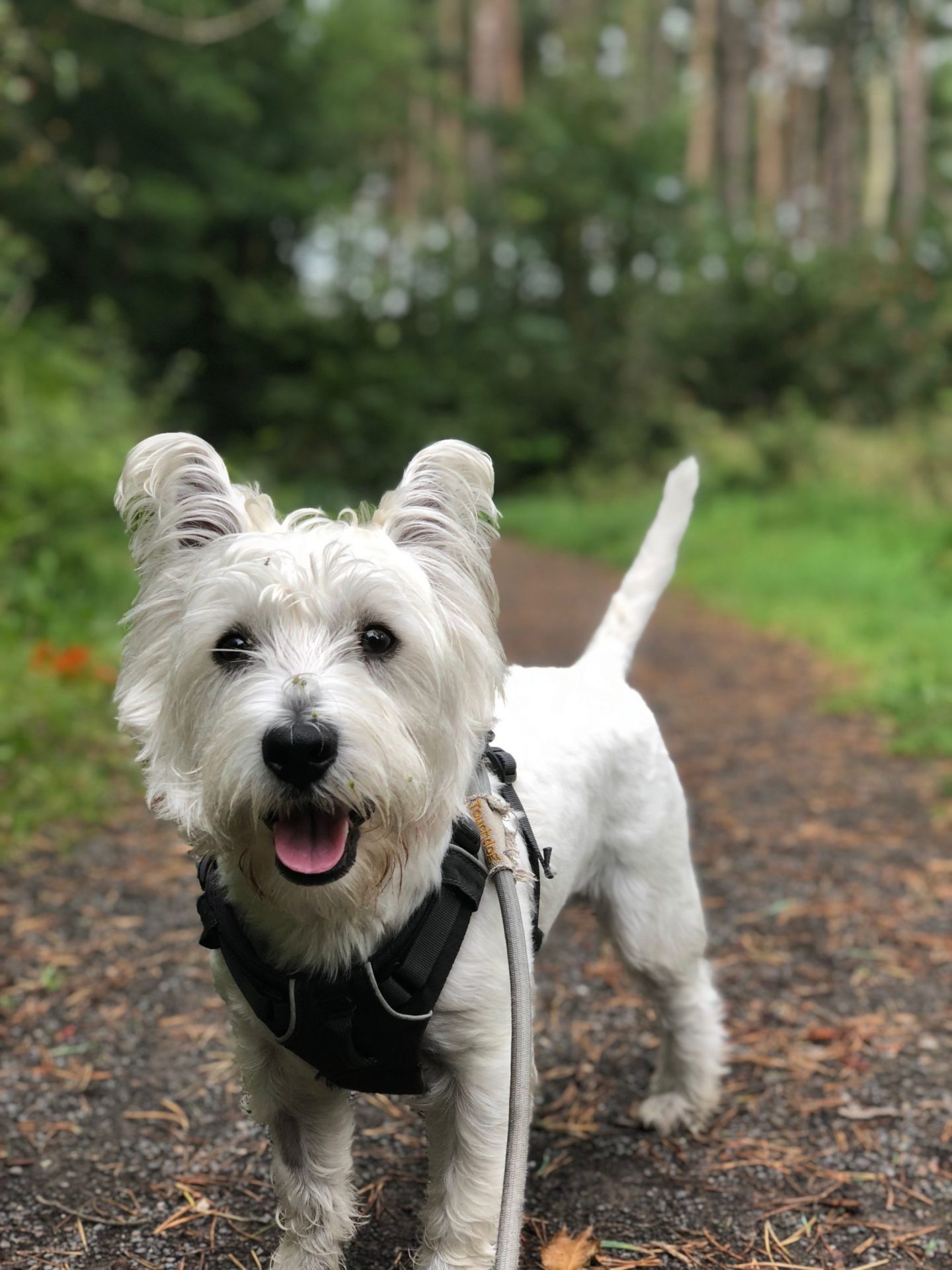 Mr. Teemo enjoying a walk down the local burn

Right now our plan is to just unpack slowly. The dining room looks like something out of hoarders, but it’s the only place we can keep all the bags and boxes as we slowly tidy up, decorate and buy furniture for the other rooms. I’m still at university finishing off my masters and once I have my first job, we’ll be able to make a proper budgeted plan for each room in the house.

The garden is also high on our list of priorities to sort. It’s very overgrown and needs new turf laid. Its’ so exciting to finally have two outdoor spaces to work with. We both love sunflowers and poppies, so I’m hoping we can get some planted.

Another reason the garden is high on our list of priorities is partially because of Mr. Teemo. Moving in together has made it easier to borrow him. We borrow him at least once a week, and he currently lives in a flat. So when he comes to the house now, I love it. He has an upstairs to run up and down, which he does plenty! But he also has a little front garden to play in and a long one thats perfect size for fetch and football. I’ve been loving having him here at the house, as it feels like life with our dog. It’s made me even more puppy broody but we’re definitely going to wait until the times right with the house and work!

We’ve come up with the longest to do list, (it genuinely will take years) but it covers everything we want to do with the place and if we get the chance to, even some renovations! Everything from small jobs to knocking through the walls downstairs to combine rooms possibly!

If everything goes well I really want to add a section to the blog for the house renovations etc! Seeing as my time as a student is coming to the end- I’m going to need a new topic to write about! I’m also thinking of writing another post about how I feel in general about moving in together and the effect it’s had on other areas of my life, let me know if that interests you!

What do you think?