We all have exams that seem an upward struggle. A module that just always seems to get in our way and that we can’t wrap our heads around. 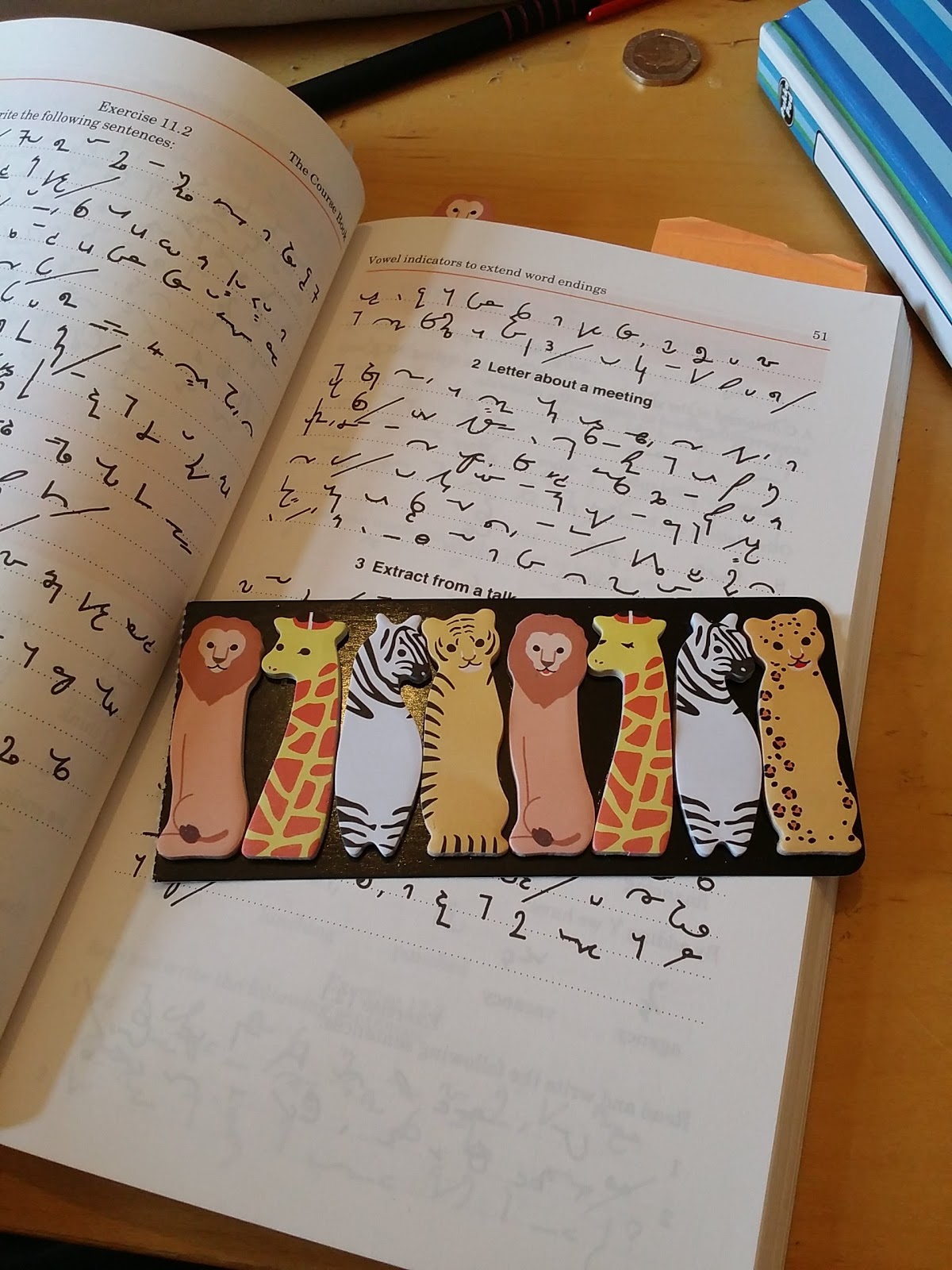 For me last year, this was my Shorthand exam. I started the year slightly later than the other first years as there were a few admin problems switching courses, causing me to miss my first shorthand class. Throughout the year I struggled with attendance due to medical issues and in the exam, I was hit with the worst exam anxiety I’ve had in years. The long and short of it, I failed and was allowed to drag it through to second year.

So all of this academic year I’ve been studying my second year modules as well as Shorthand. Our exam was to the speed of 40wpm, the beginner speed. Most journalists can do 100wpm but hey I have to start somewhere.

I suck at it to be honest. But I had to pass it or otherwise face having to leave university due to regulations and rules that state you can’t stay on the course trailing modules.

I suffer from pretty bad anxiety and I take medication for it but this exam literally became the reason I took it everyday. The worry and stress of all this pressure got to me. I’d gained weight. I’d not been able to sleep properly in weeks, constantly napping and staying awake all night. I’d have the worst night time blues I’d had in years and every night when I tried to settle down to go to bed, I would be filled with a balloon of anxiety that I felt would pop at any moment and have me crying with the pressure. I would even revise at midnight and into the early hours of the morning, just so I could add an extra bit of time onto the hours of revision I had planned for the days.

I decided a logical, systematic approach was the best way to tackle this mountain. I say mountain because like an actual mountain, I was pretty sure I couldn’t get over this summit. It just seemed impossible.

I spoke to my module tutor and she told me that it has never taken more than 60 hours of work for someone to grasp 40wpm shorthand and the best thing to do was little and often, only about 30 minutes at a time and pay more attention to dictation and shortforms and phrases. For those who don’t know what I mean, in shorthand you can shorten common phrases to one conjoined squiggle or ‘shortform’ to mean that phrase. For example, one little squiggle could be read as ‘ we shall be able to’ and all it is is the squiggles for the letters ‘W Sh B Ableto’ all shoved together.

My shorthand tutor was so helpful. Despite my problems with it, she continued to help me and advise me what to do during revision. I stuck to her advice as much as I could and practiced as much as I could without burning myself out. 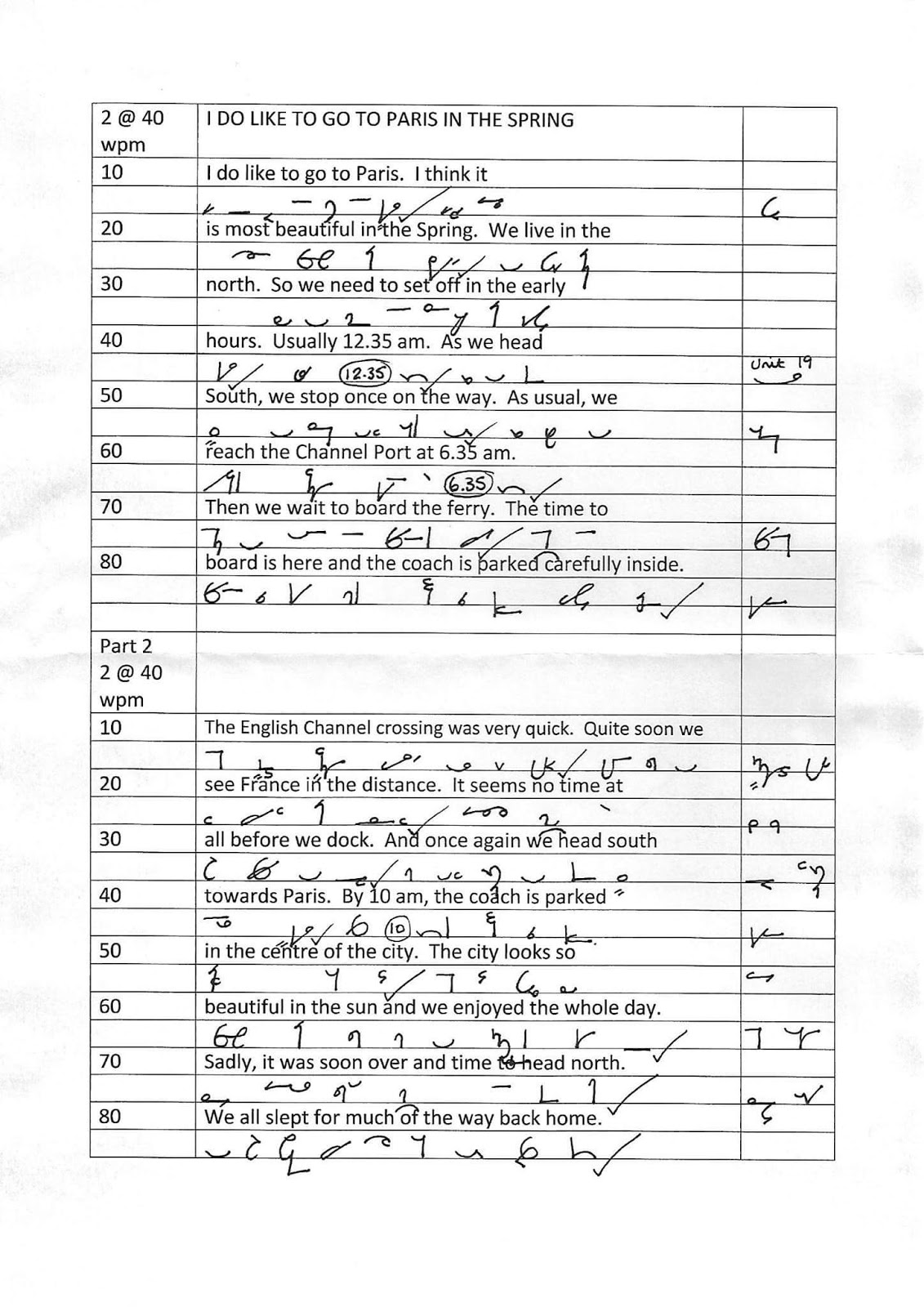 On Monday, I had a horrendous panic attack before the exam. I was still at home but I honestly believed I couldn’t do it. But I turned up and waited outside for my turn for the exam and I sat and wrote out all the key notes from each chapter and practiced the stuff I always slipped up on and tried to keep a level head. I made sure I stayed hydrated and calm whilst I packed up and walked into the exam hall. I made sure that I couldn’t have anxiety over my sometimes awful hearing and sat right at the front as close to my tutor as I could get.

2 minutes of dictation at 40wpm.

2 minutes of further dictation at 40wpm.

I slipped up near the end of the second passage and panicked but kept going hoping my brain would fill in the blanks, and thankfully my brain remembered it as it was one of the most complex sentences in the piece.

In about half an hour it was over. All I could do was sit and wait to be told the next day whether I had passed or not or whether I would have to go through it all again for the followng week.

Now to anyone who has read this far, it may seem that hey it’s just an exam, calm down.

But for me, exams are everything. I was the academic kid in my family and I always did well when I applied myself, so to find myself unable to grasp something over an entire year was hard. I tried to see it as a challenge, a hurdle that was big but that I could jump. I would switch between confidence and despair whilst revising on the flip# of a coin and it terrified me.

I had finally found a course I was willing to stick long hours into, that I enjoyed and I felt used my abilities and talents well and the idea that it could be taken away from me just because I couldn’t grasp one exam- I couldn’t handle it. I made a spreadsheet with hours of the day and days of the week on and filled out blocks of revision on it- making sure to reach my goal of at least 60 hours revision.

I stopped blogging and vlogging because my coursework and revision for this exam was far too important to mess up.

The next day I recieved an email telling me to come in to collect my exam paper. I dressed in half a minute and raced down to a taxi waiting outside. I wasn’t wasting time cycling or walking- I needed to see my results as soon as possible.

I was so nervous, constantly reminding myself not to be too upset if I had failed and that I still had a week before the resit. But also telling myself that I had felt confident for the first time in awhile as I left the exam hall, but not to expect to have passed just so I didn’t get my hopes dashed.

I went into the office and collected my paper, flicking through to the end of my writing and saw a ‘97%’. My stomach did a strange flopping jump. A happy but nervous jump.

Now before you think I passed with amazing flying colours and I’m a drama queen. A shorthand pass is 97%. You need 97% accuracy in your transcription in order to pass. We were allowed to make 5 mistakes.

I spoke to other students who’s marks had a straight pass or fail written on their paper and I was so nervous as mine didn’t say either. I went to speak to my tutor, emailed another two and waited to celebrate. I knew in my head the pass mark was 97% and I had 97% but I was not going to celebrate until I saw the words come through from a tutor.

I HAD DONE IT! 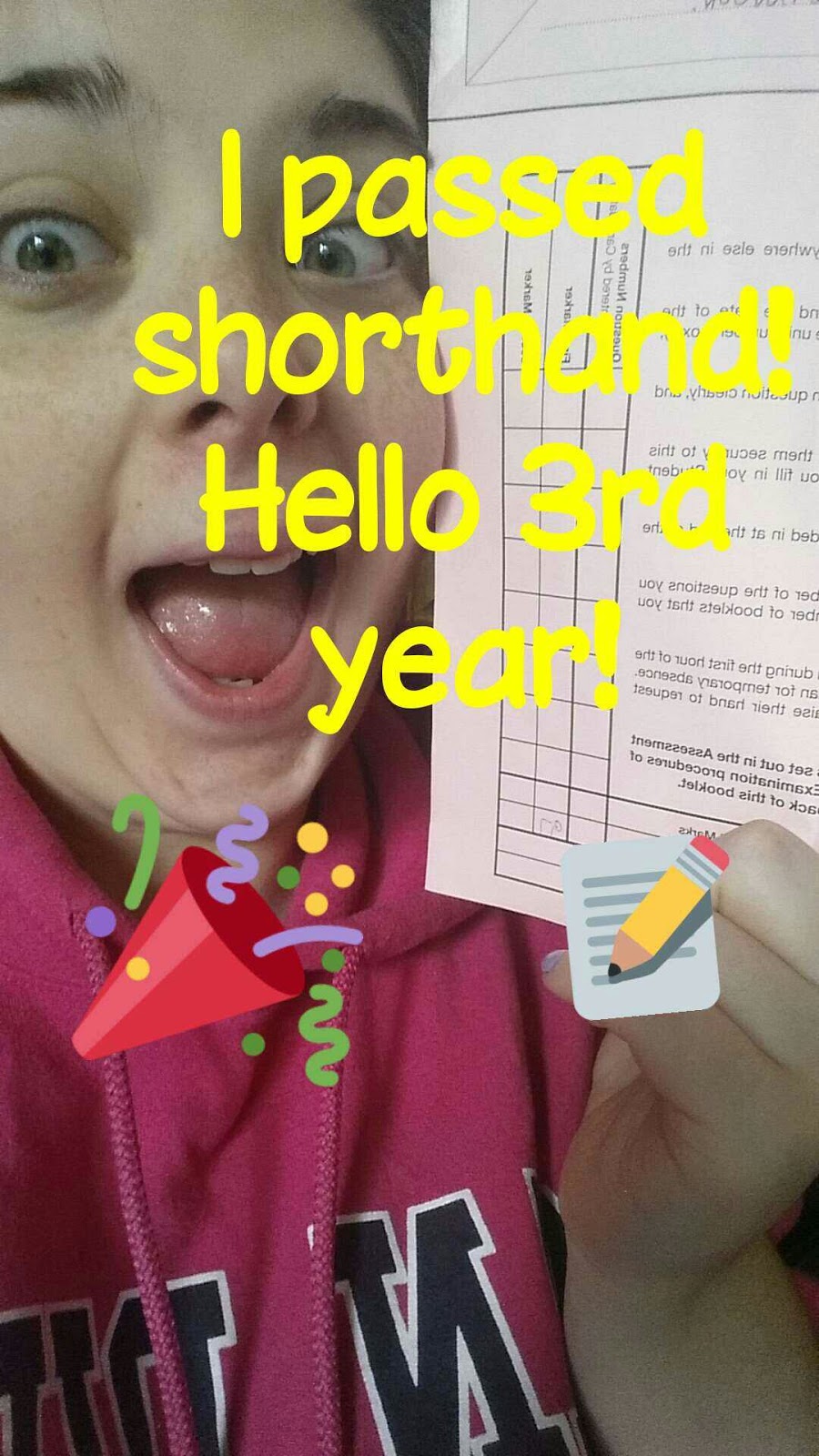 It’s now two days later and I still can’t believe I passed it. I kept kind of waiting for an email telling me I had to resit next week. I still can’t get over the feeling of passing something you never thought you could! Of showing your anxiety who’s boss!

Andrew and I went out for a drink and a quick chat in between his lectures for a quick celebration and are going out later in the week when we both have time off to properly celebrate. All the stress is gone now. I have nothing to worry about other than passing my law exam on Friday, but I enjoy writing essays and I did two years of law previously, so it doesn’t scare me like other exams do.

Months of revision and panic and stress are pretty much over and has settled into usual exam anxiety, the stuff that all students get. But I’m just going to spend the rest of today sat revising from my powerpoints and notes and not stress about it- this exam is going to be nowhere near as stressful.

People always tell you to calm down when you have anxiety but sometimes it can be the drive and push you need to do well- it can get the adrenaline flowing and make you act forcefully and mindfully of your own future. I knew my future career would have been in jeopardy if I didn’t pass that exam and that sort of pressure and anxiety was what drove me.

I had a lot of support from family and friends, with my parents sending me supportive emails most nights when they knew I’d be studying and not sleeping. It really sometimes is the little things that show that people love and want the best for you.

So for anyone out there suffering with anxiety, especially exam anxiety, it can sometimes be a great motivator and a great thing in your life. It will make you feel awful and you must do all you can to keep it at bay. Do what you need to do to make yourself feel better and try not to be hard on yourself or set unrealistic standards for yourself.

I will write another post about more exam related ideas such as ways to beat stress etc but for me I found having company whilst revising ( as I live alone) really helped. I also used Borrowmydoggy a lot to give me some company whilst I revised as well as got me out of the house. 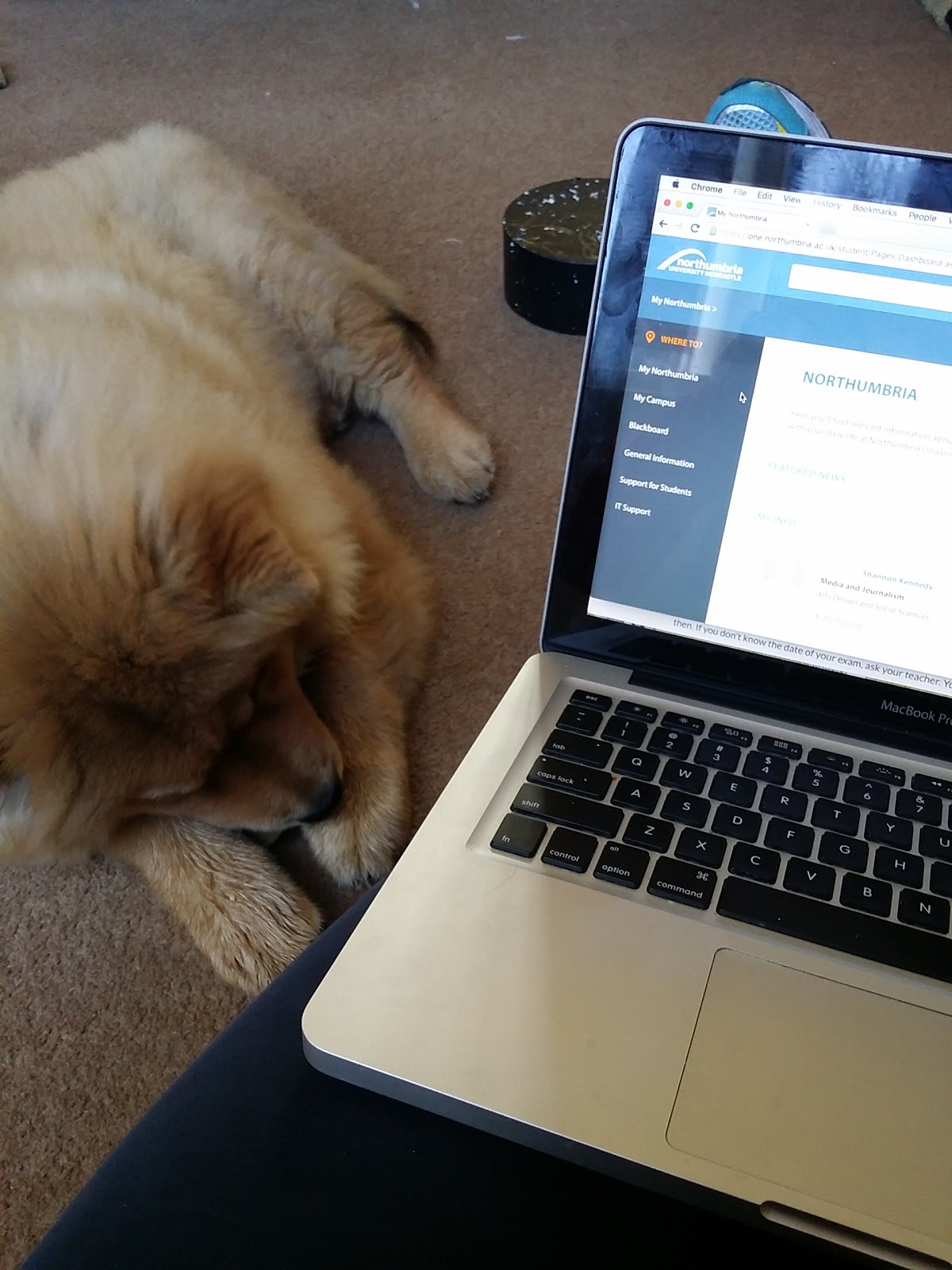 I hope everyone has a good time during exam season and that the pressure isn’t too much and you get the results you want!