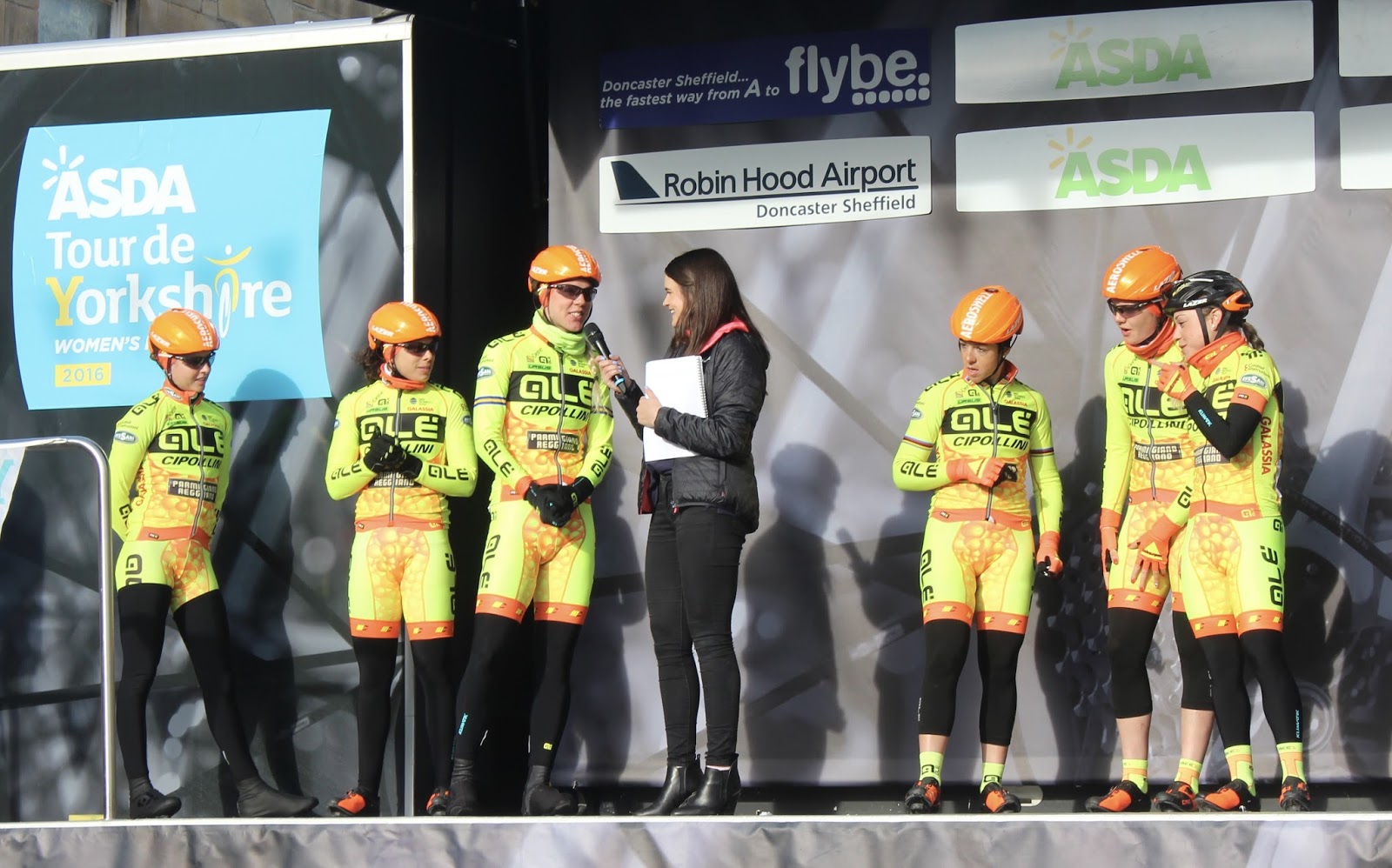 For one of my assignments for my ‘Journalism and Design’ module we had to find 3 news stories and write a 500 word article as well as creating a podcast and a video for each of them. 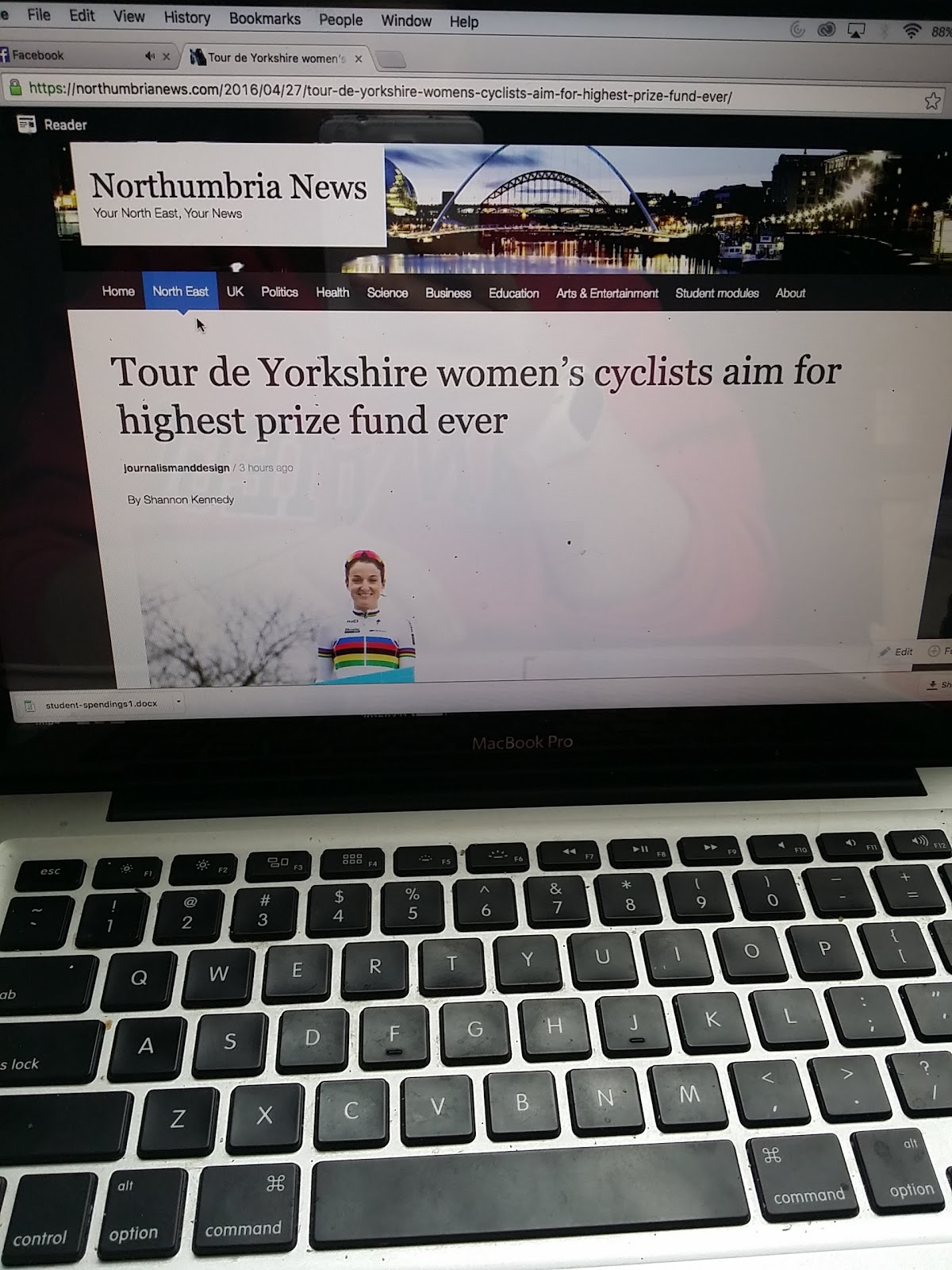 So for one of them I chose this years womens race as it was making headline news, especially with all the controversy at the moment within the sport of cycling to do with equality as well as generally in sport about the gender pay gap.

This race was going to be a monumental change to women’s cycling and the most lucrative of the calendar. The gender pay gap has been everywhere in the news and this race, sponsored by ASDA, was coughing up £50,000 in prize money for individuals and teams with the individual winner of the womens race earning around £15,000. This prize money is higher than even if a man won all three stages of the weekend!

The women also won the right to have the race televised live (although that was completely ballsed up by the TV companies) as well as to race the exact same route the men were going to race later on that day.

Andrew has got me really into cycling again. I used to love it with my family but I rarely see them now because of university and the cost of travelling home, so to have something we can enjoy watching and doing together was exciting.

I wasn’t sure about going to The Tour De Yorkshire as my exams start next week and I always get nervous about revision but I do want to be a sports journalist some day and it meant a weekend away for literally nothing so why not! 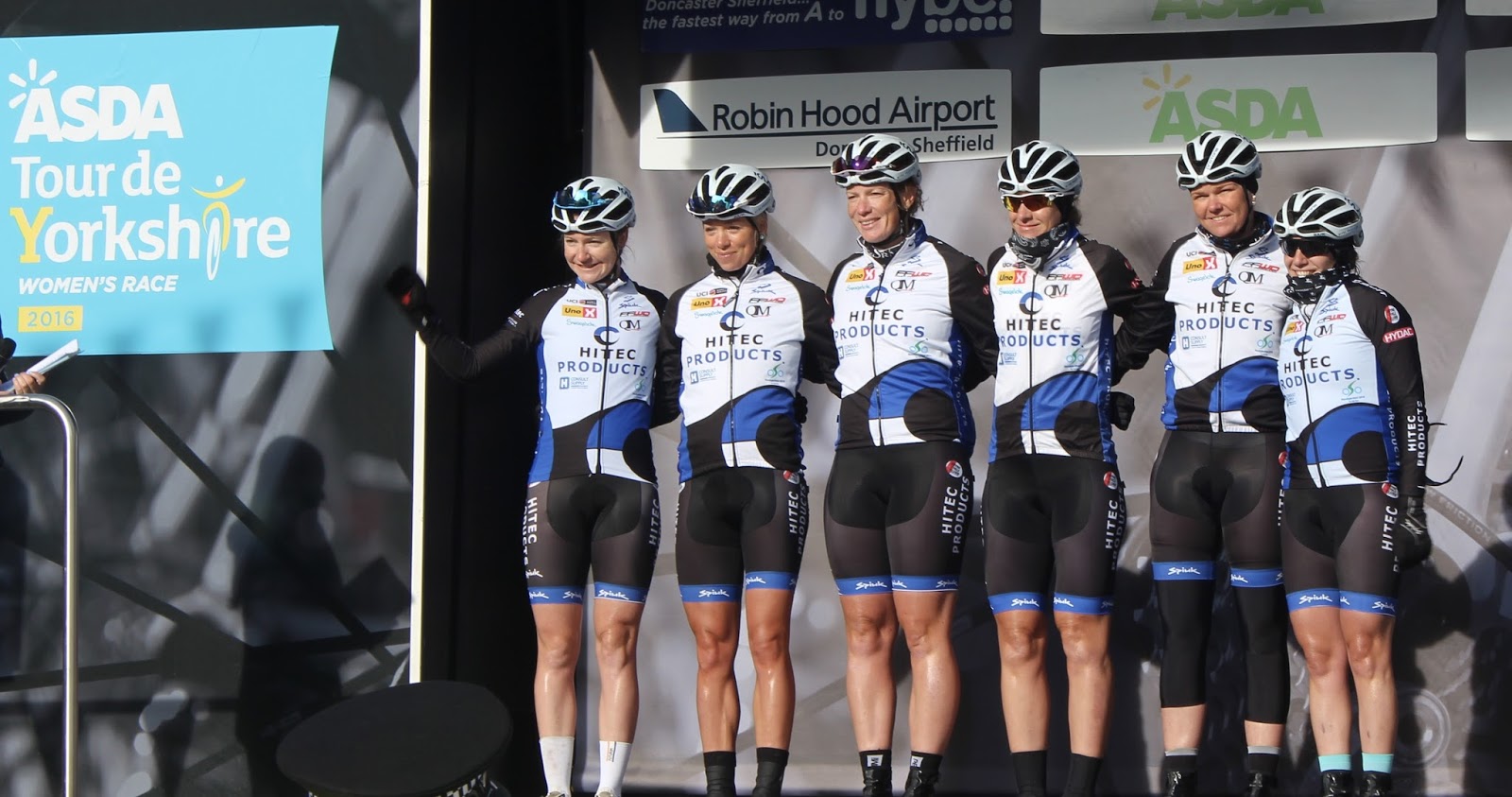 We arrived at around 8am on the Saturday morning just before the womens race began. We headed through Otley to the stage where all the teams had to sign in. I got into the second row, so quite close and not such a bad distance to get some good photos!

Most people seemed to have not turned up for such an early start but you wouldn’t have known it at the time as there was plenty of people there cheering on the women!

I thought it was great, as someone who wants to get more into cycling it was great to see these potential role models up close and see what they achieve! 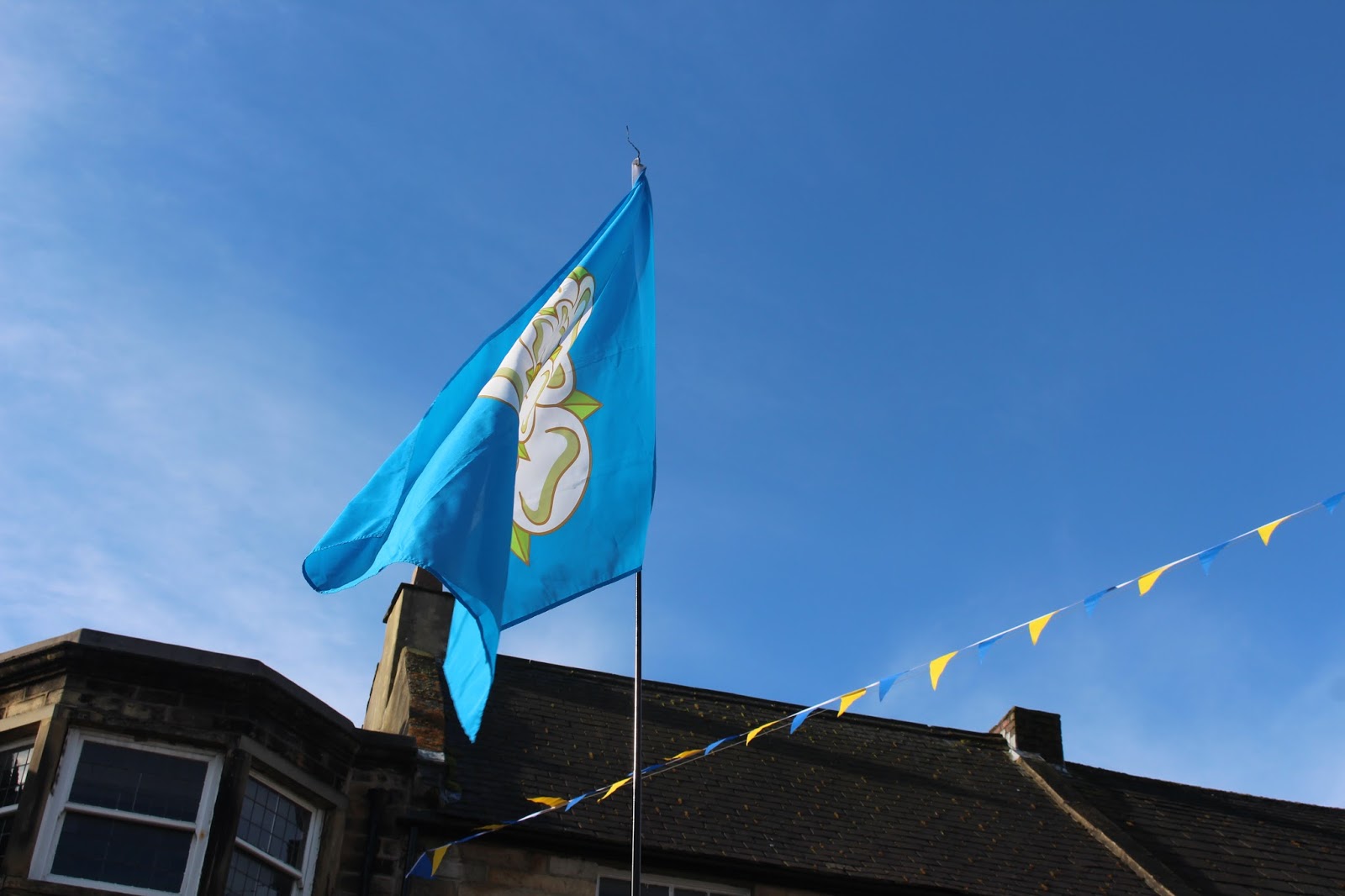 The weather was absolutely perfect if not a little crisp and changed throughout the day from sunny and warm to very cold but we dealt with it by hiding in the crowds or ducking indoors for a bacon roll and a cup of tea!

As soon as the last team signed in we all rushed to the streetside barriers to get a view of the cars all lined up ready for the race. So many people, so many banners and a lot of colour noise and excitement whilst the countdown happened. 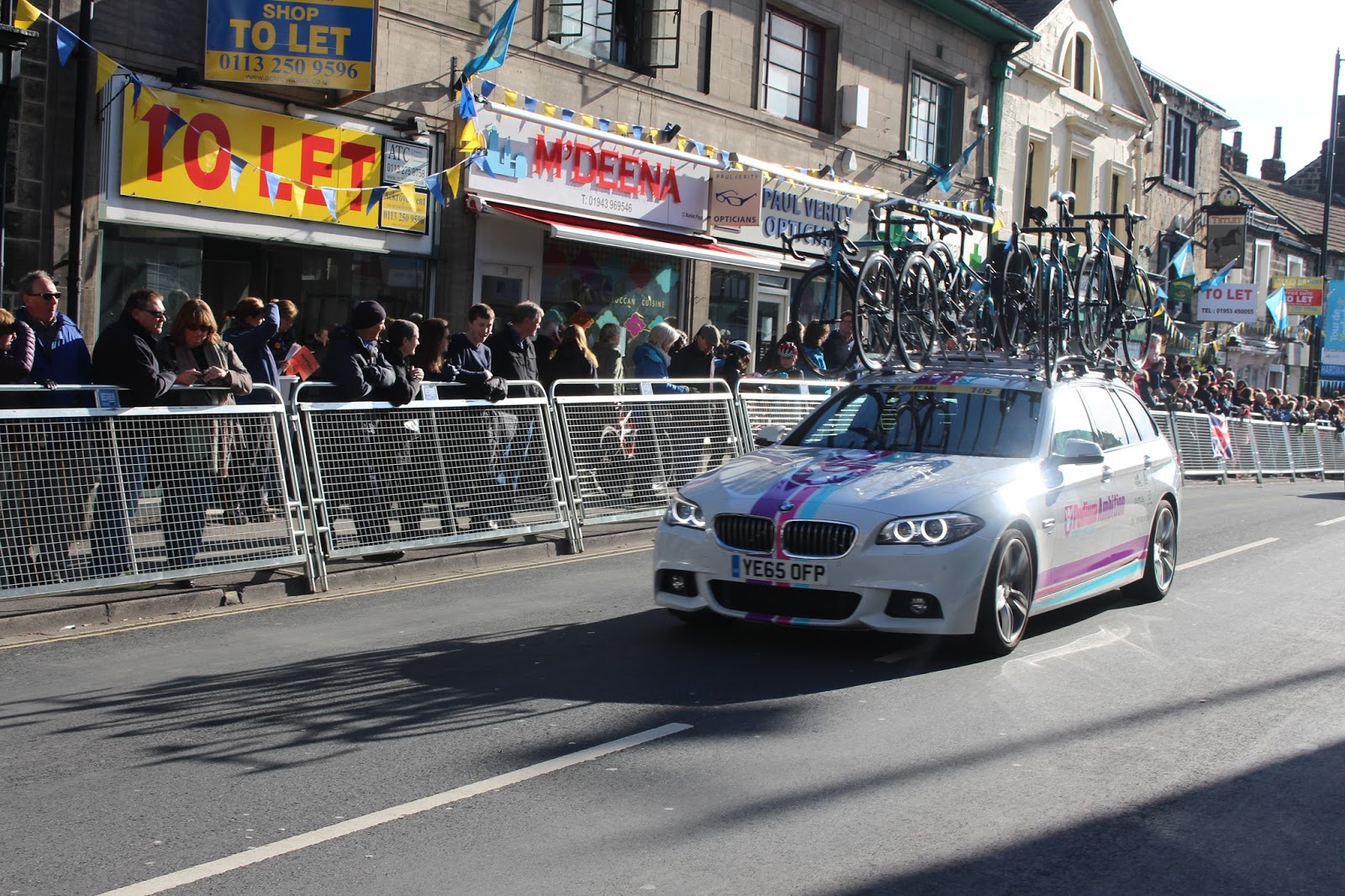 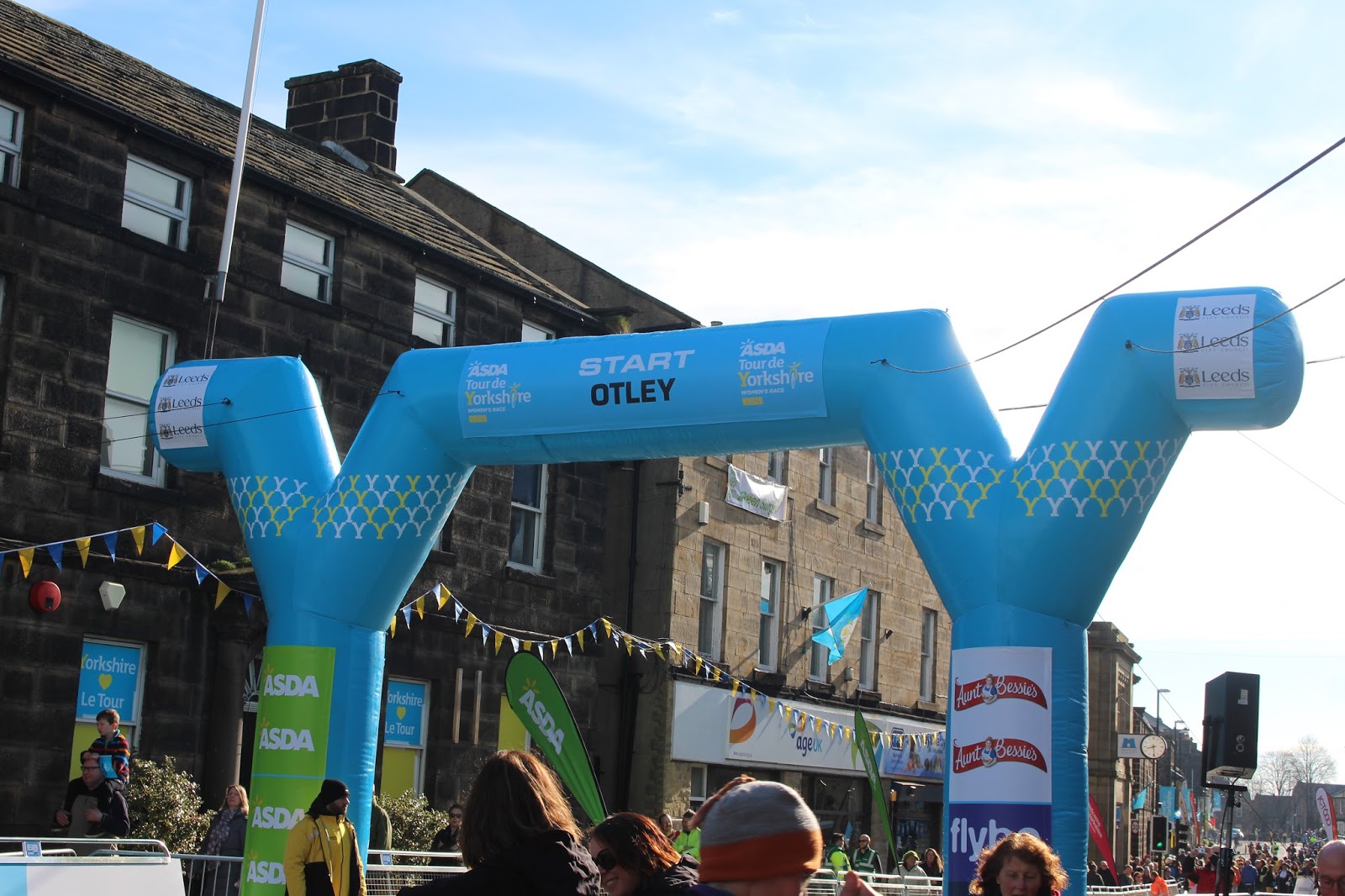 The cars set off with Otley born and bred rider, Lizzie Armitstead, the World Road Race Champion set off at the head of the race! 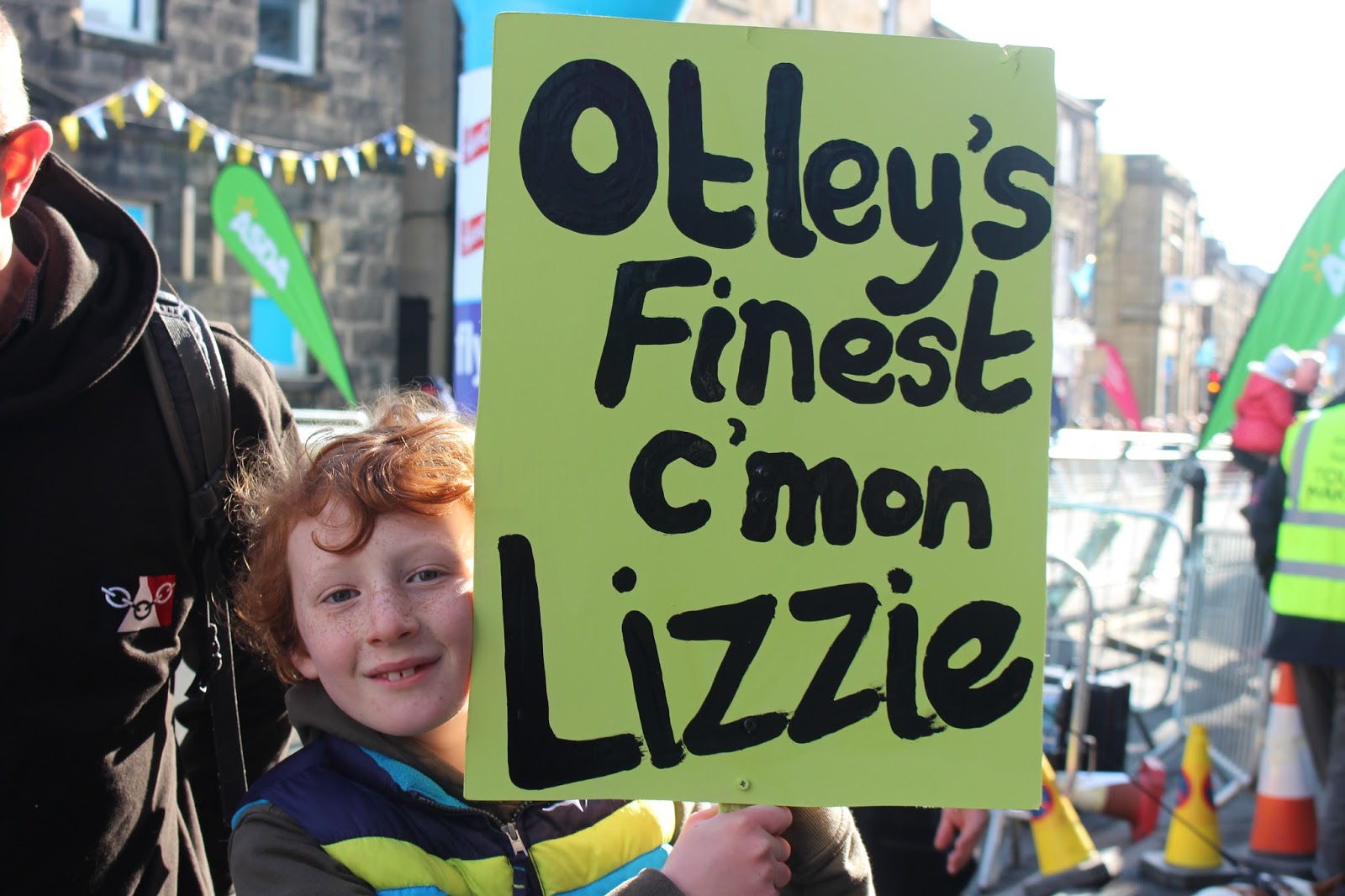 Otley is a really small village and they did a loop around it before heading out towards Doncaster. They headed up the road we drove down and round a roundabout, probably a mile away if that, and we ran as fast as we could to get back round to the other side of the loop, ( literally down the street) but they had already gone past! 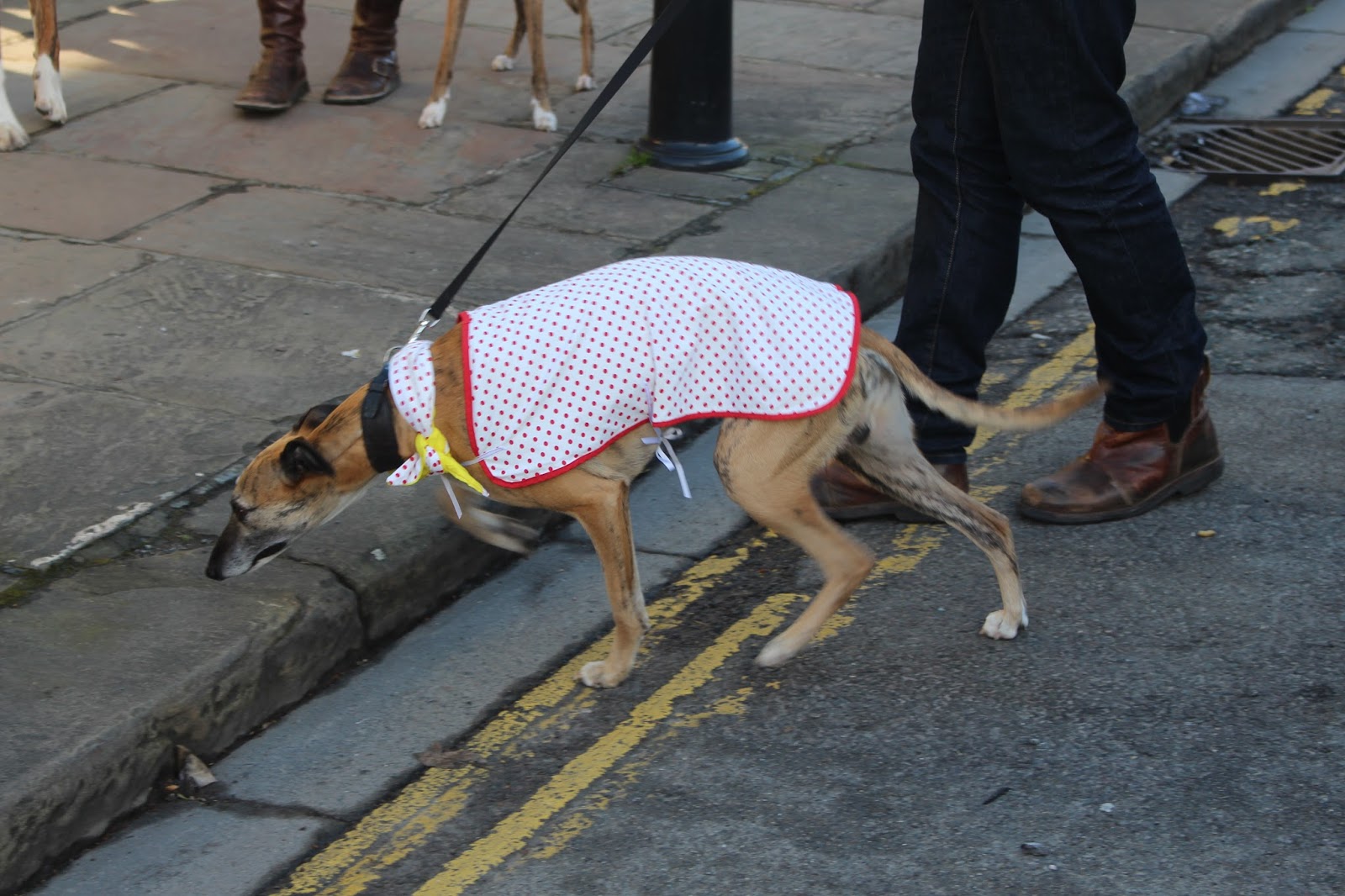 Walking around Otley for a few hours, we waited patiently for the mens race to begin. No-one had any idea as to when the team buses were going to arrive so it was a bit of a tense wait. 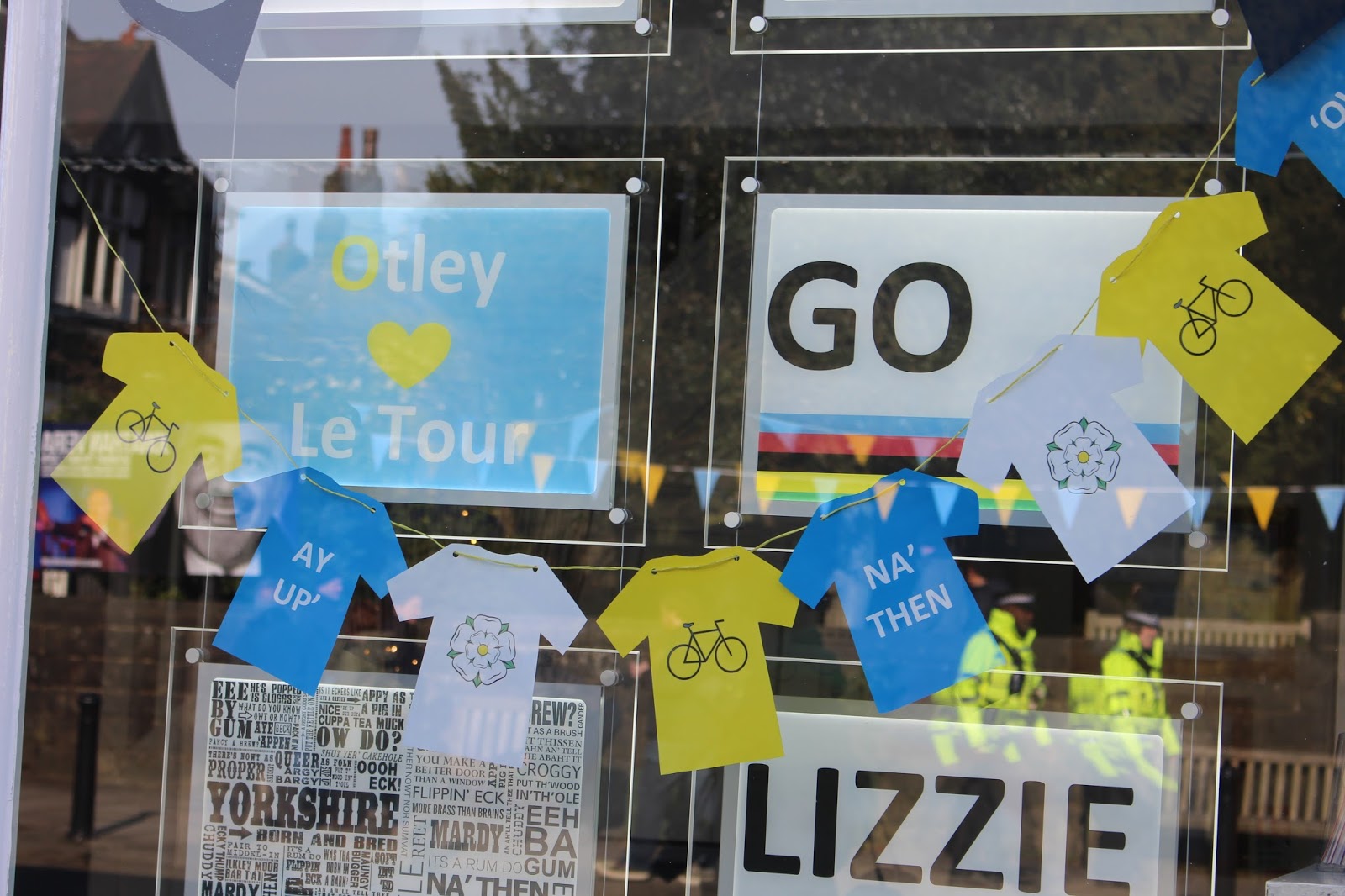 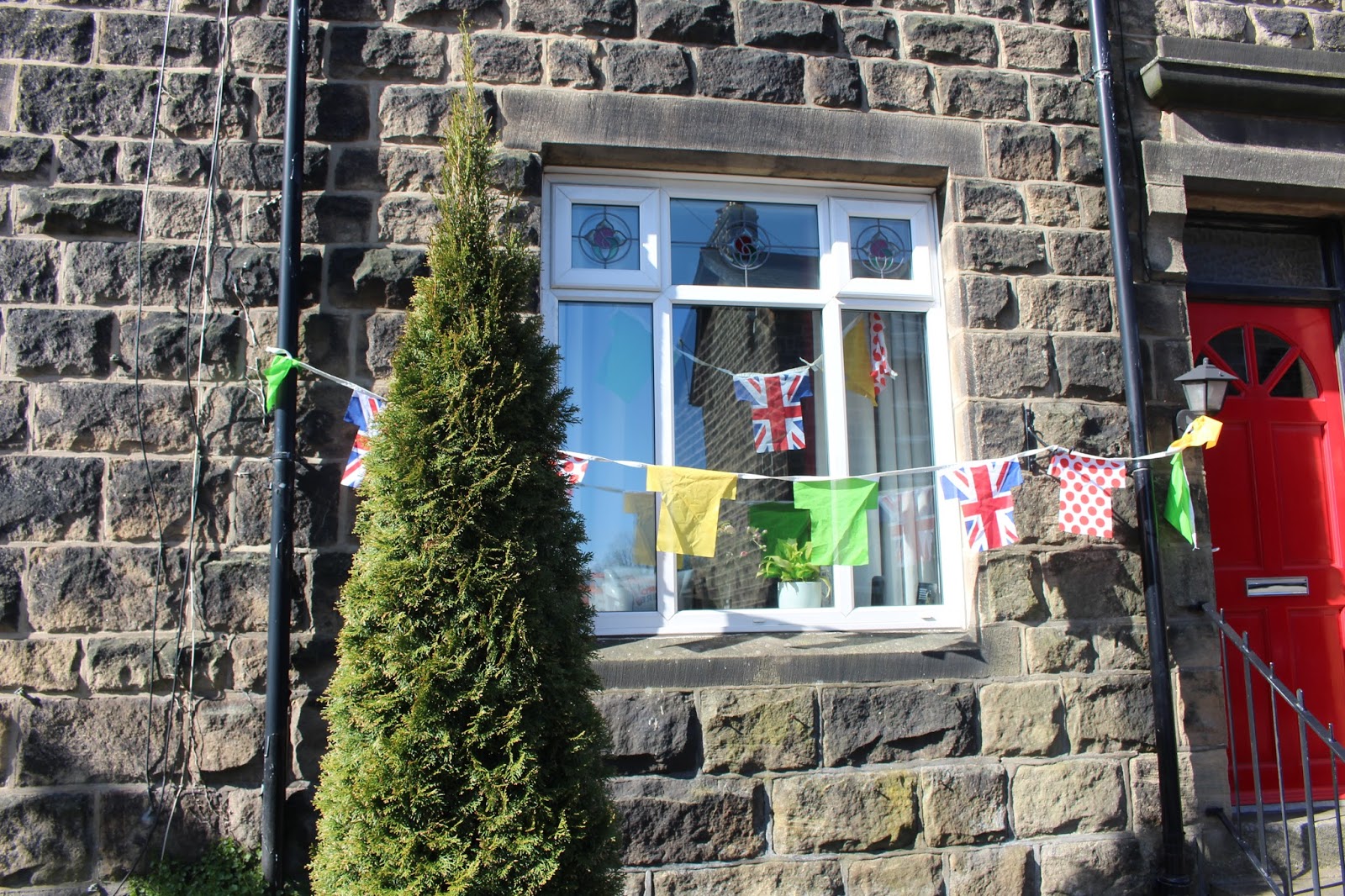 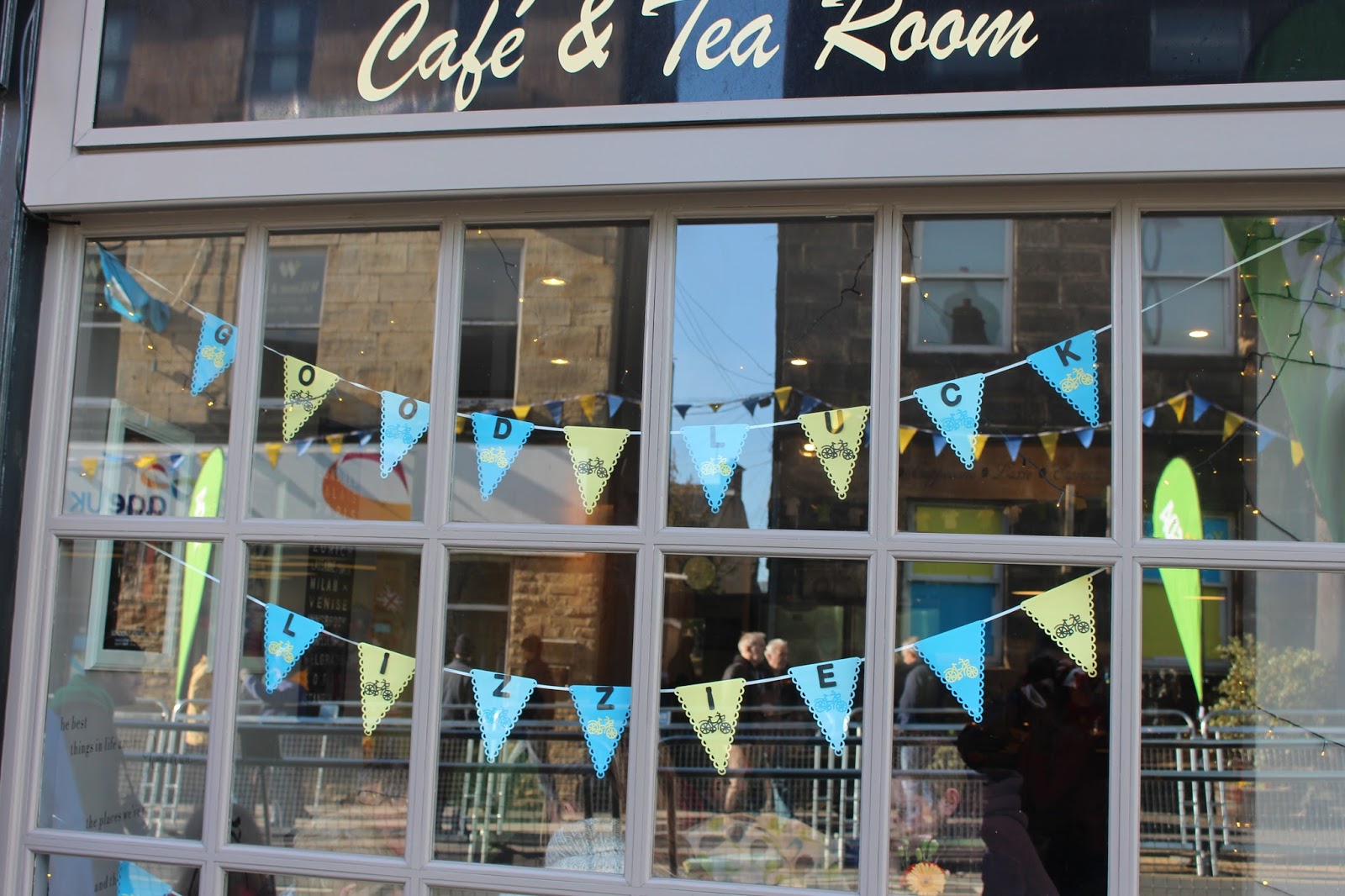 And they were away! Which left us with a few hours to kill until the mens race.

Luckily, Otley was filled with lots of people and a Spectator’s hub which had a huge screen for watching the racing as well as the previous days ride whilst we waited for the live coverage.

Whilst we walked around we saw plenty of banners, the Leeds Pipe Band playing and the local youth cycling team playing around. We even got a little chat with the Town Crier who did the announcing! 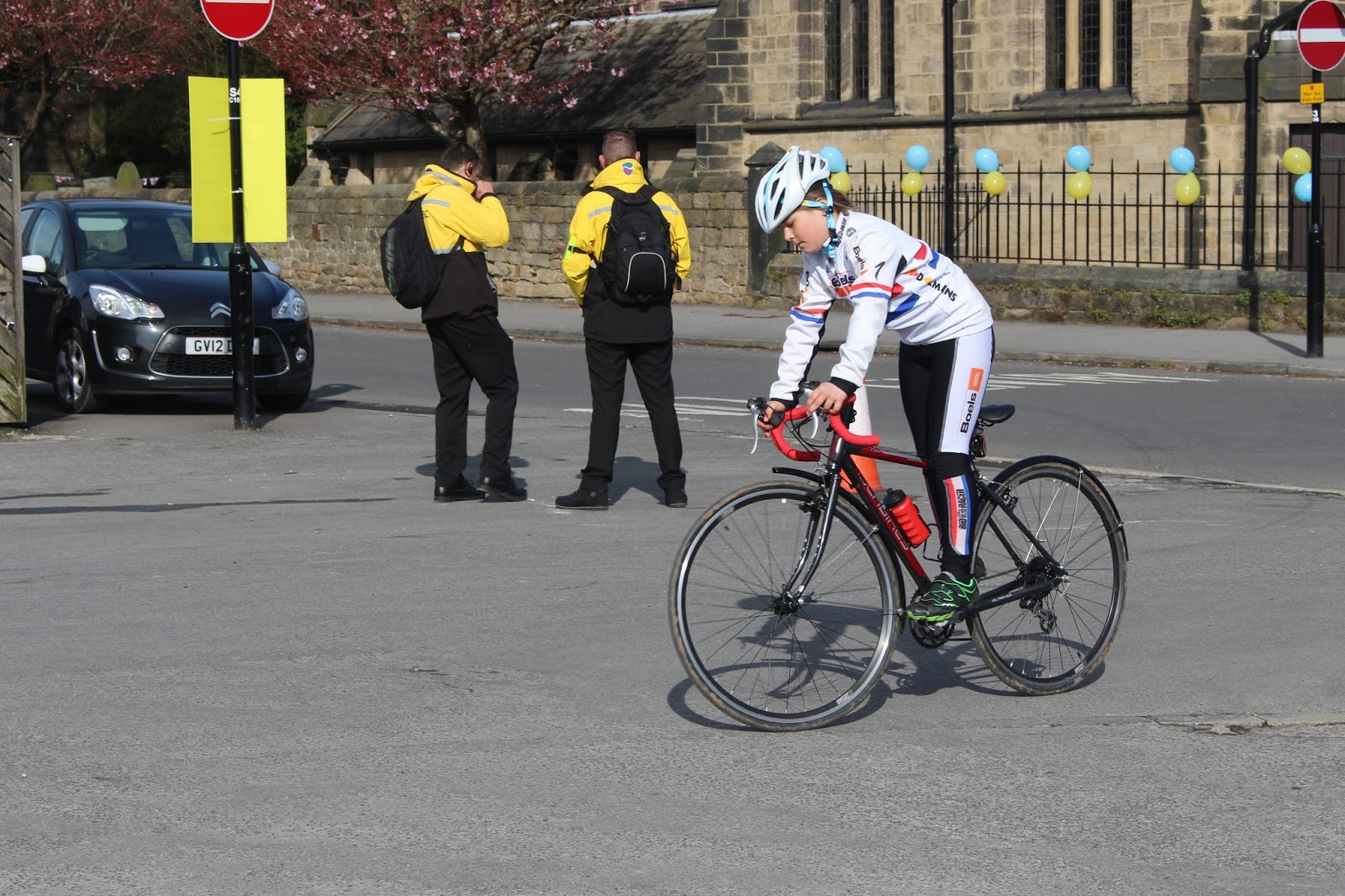 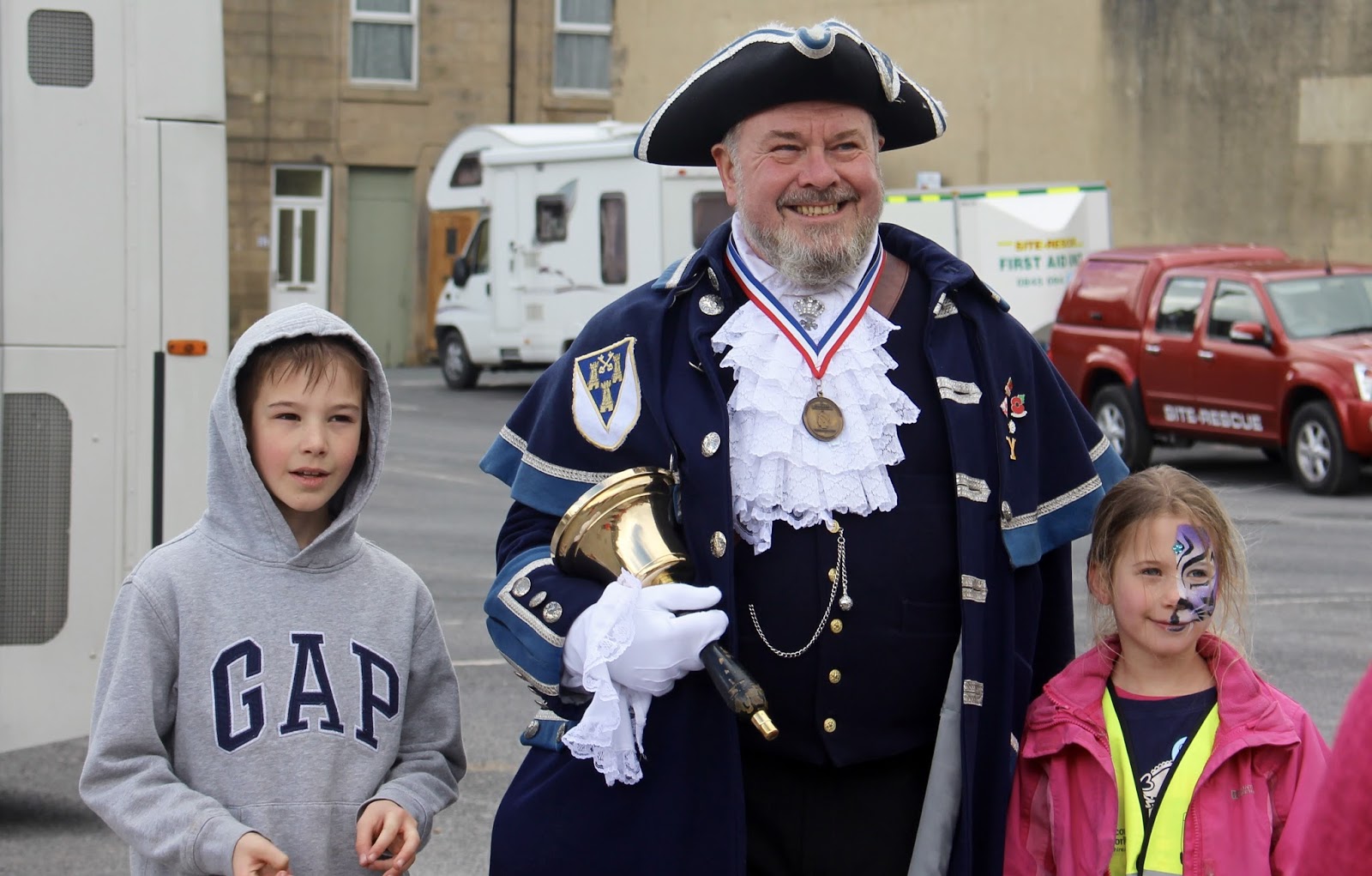 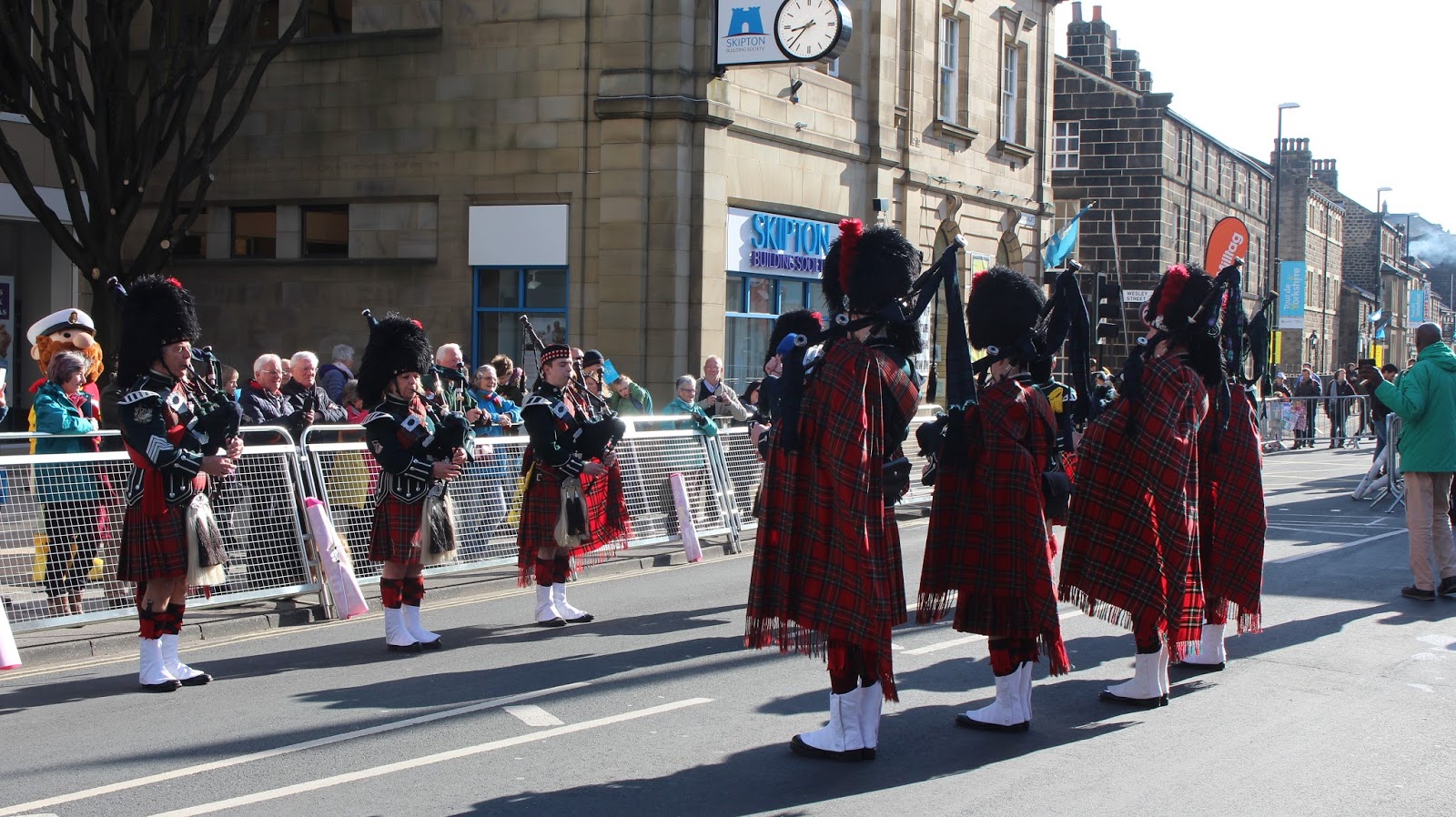 We headed down to the Spectators Hub which had lots of food trucks, and inflatables and stalls for people to mill around. This was where I found out about the Yorkshire Bike Libraries scheme (blog post to come soon!) 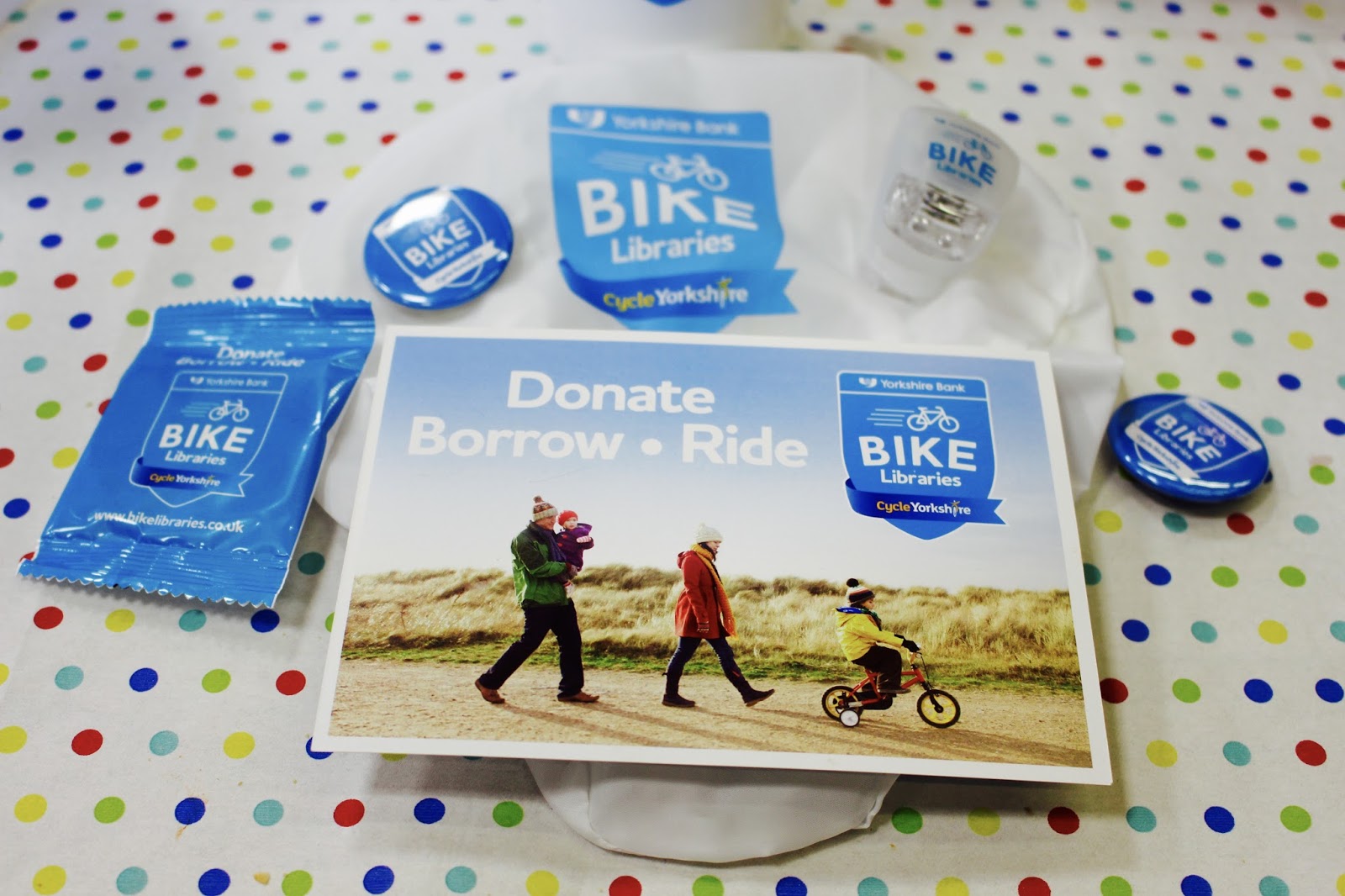 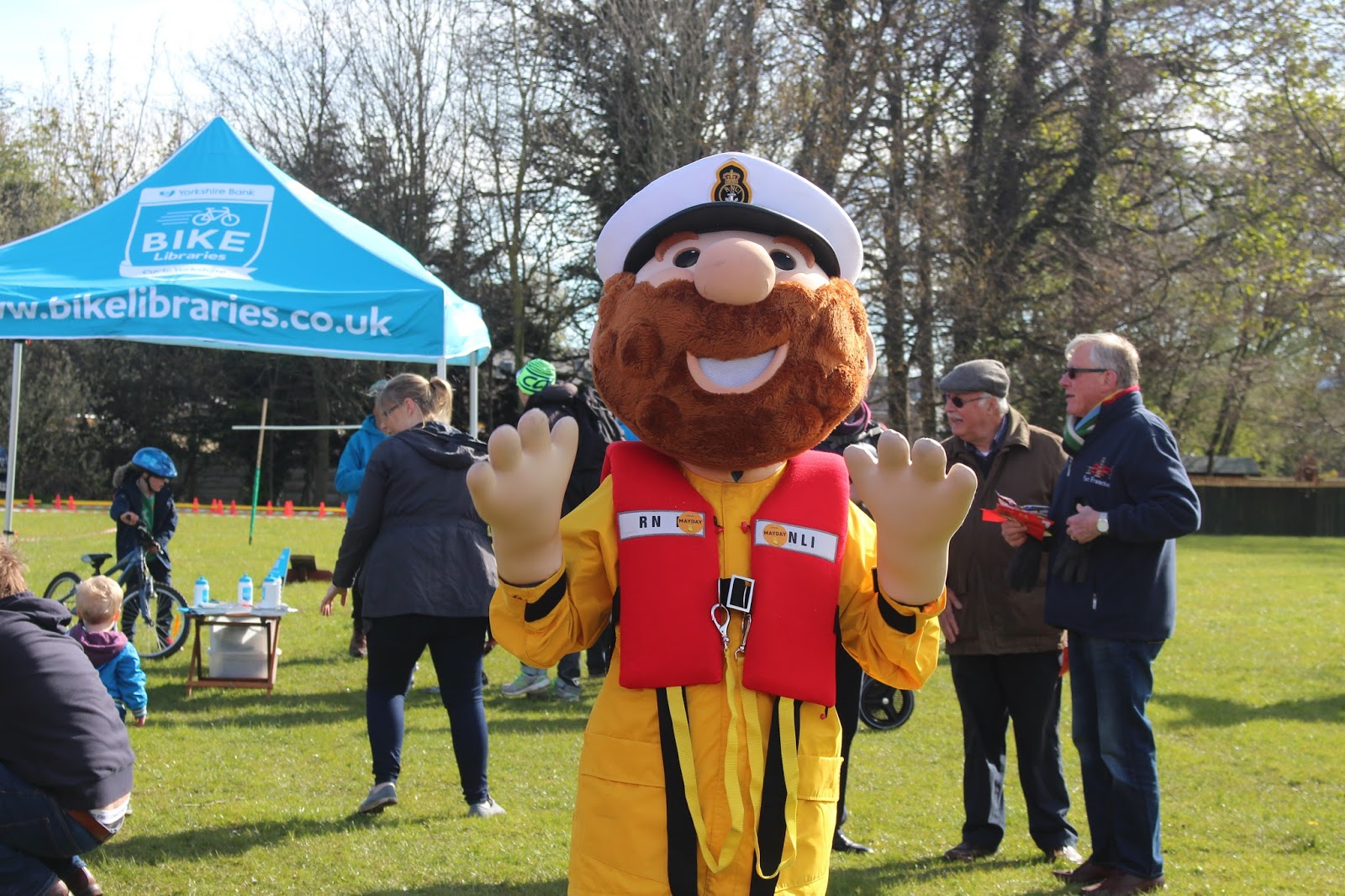 The RNLI were even there fundraising! 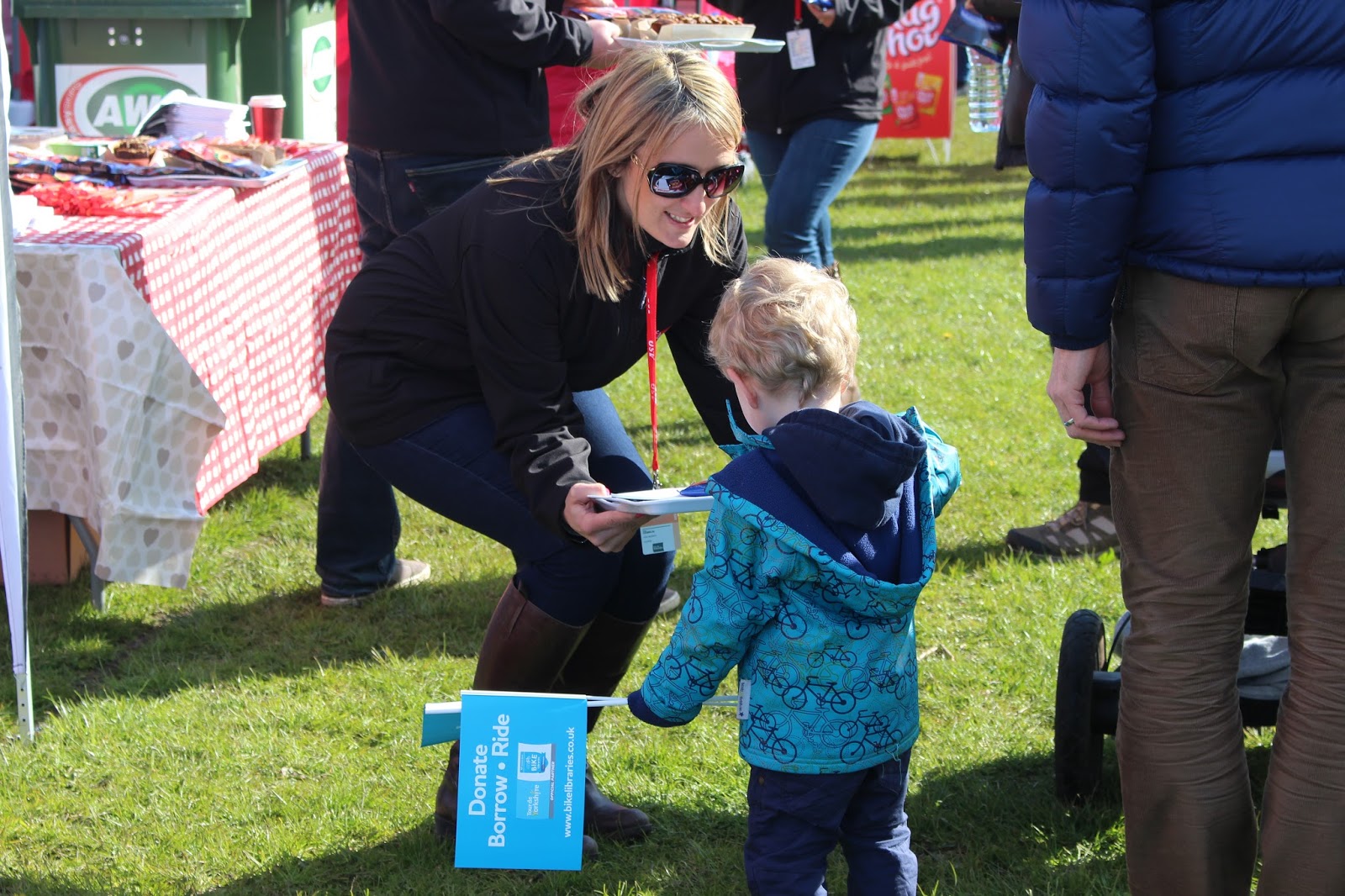 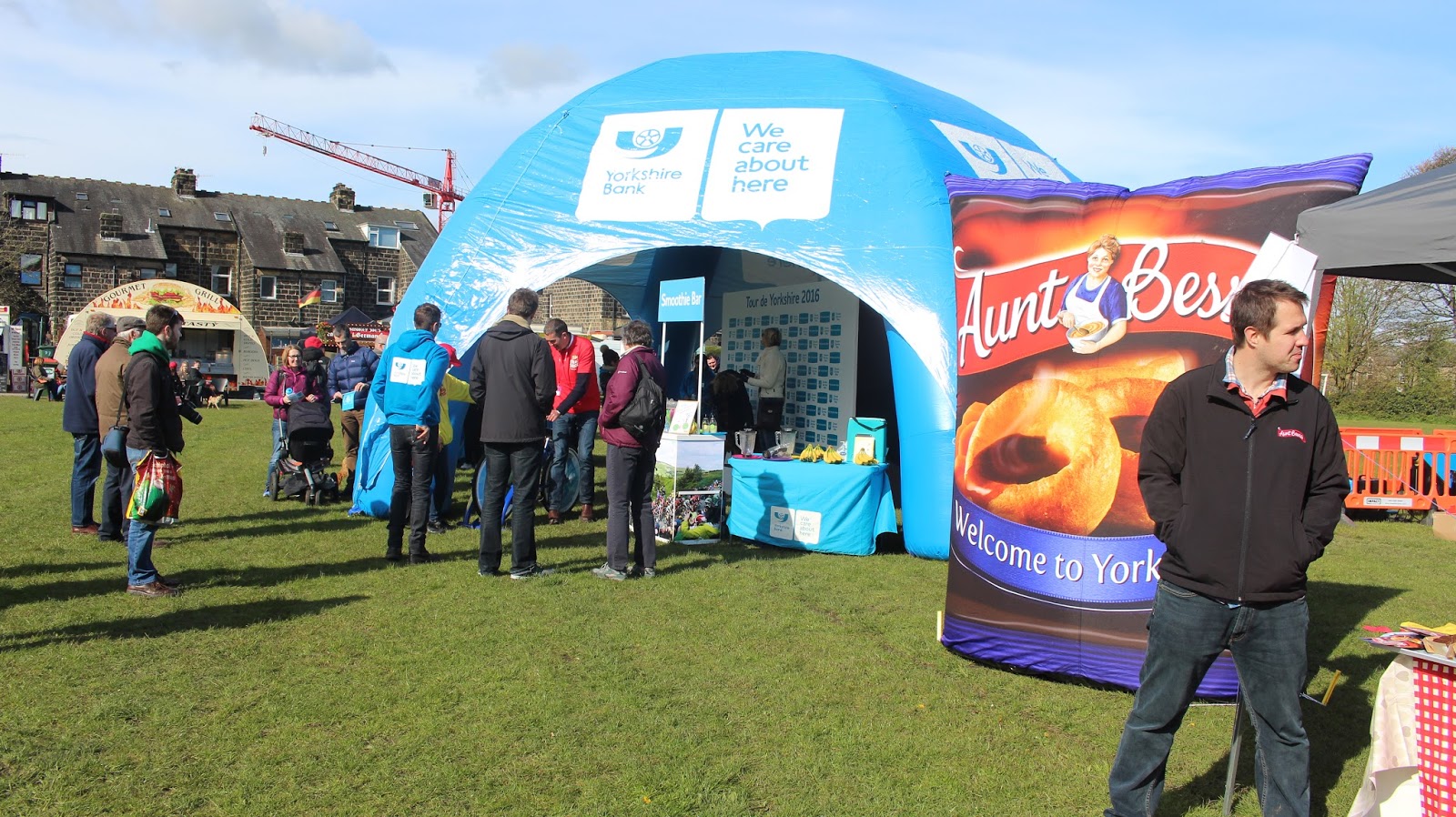 You couldn’t have an event in Yorkshire without Aunt Bessie’s being there giving out free Yorkshire pudding mix. (We poor students lapped them and the free Mug Shots up!) 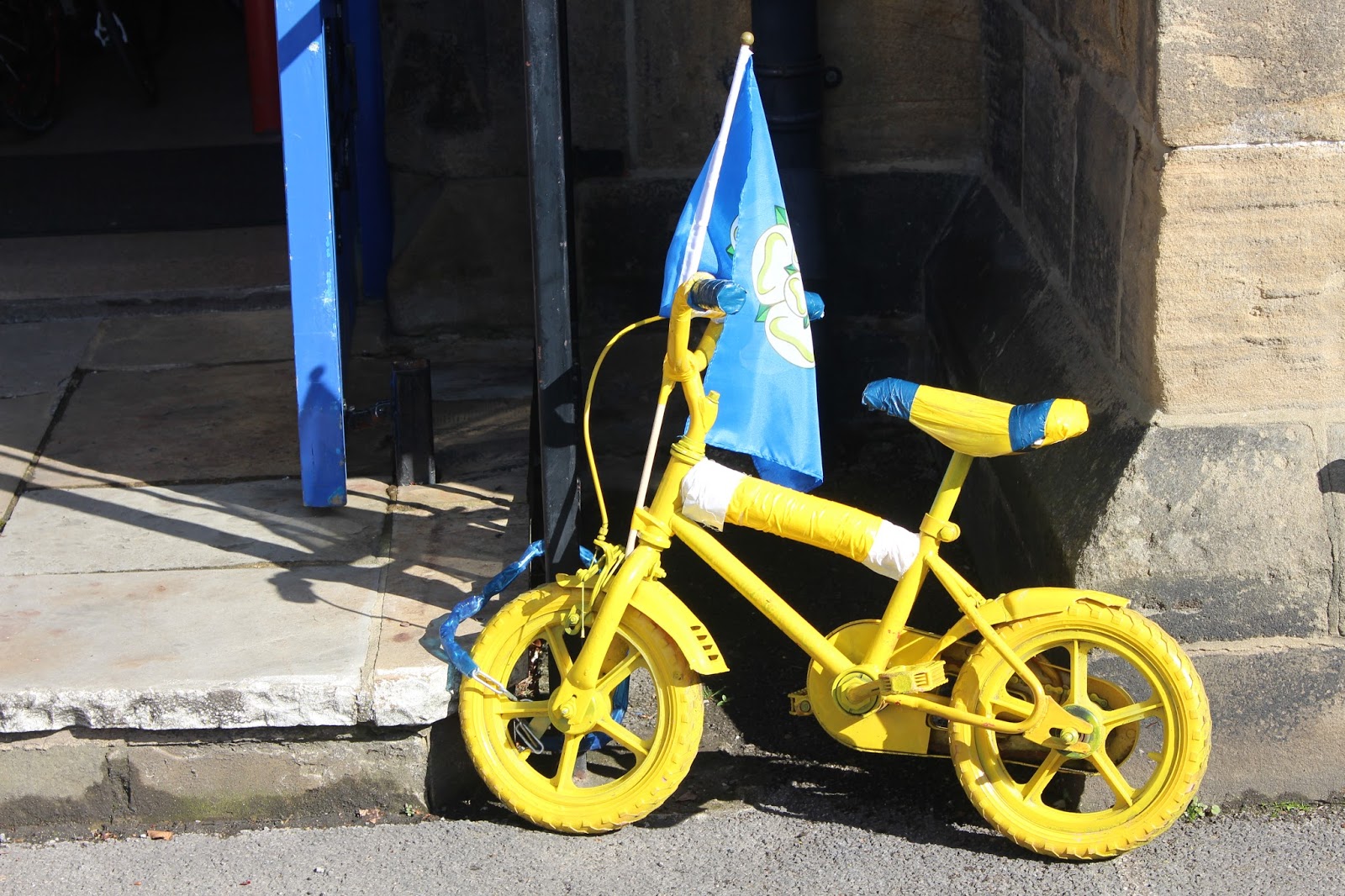 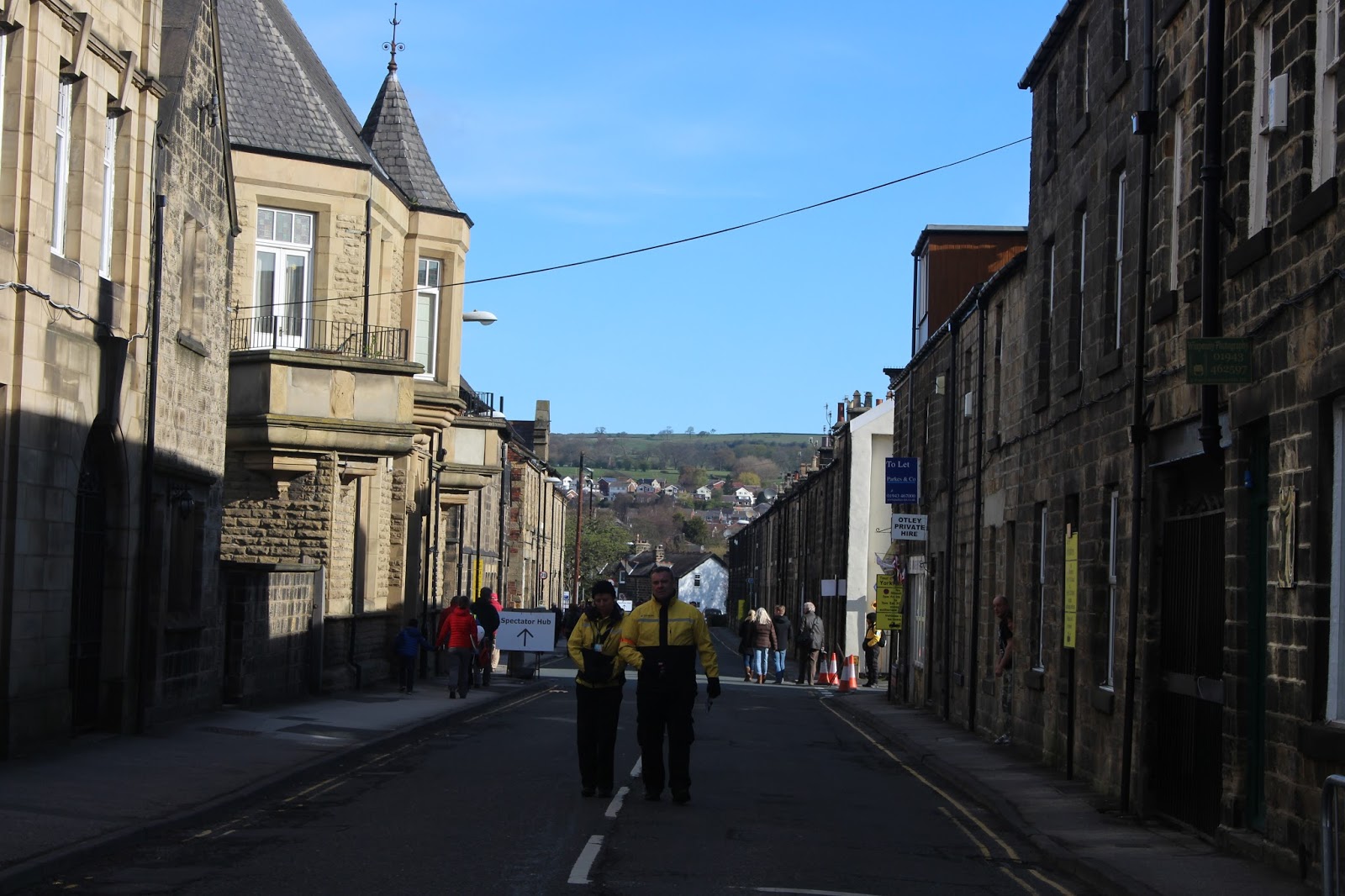 For me one of the exciting things for me was meeting the BBC Radio Leeds team.

I have got myself a placement for my degree at Cyclist magazine over the summer so any experience or tips I can get, I’ll take them!

I sat and watched them interview the Mayor of Otley and it was really interesting to watch the team walking around the carpark whilst doing their radio work. I even got to speak to one of them and got lots of advice as to what I should be doing at University to get ahead in my career! 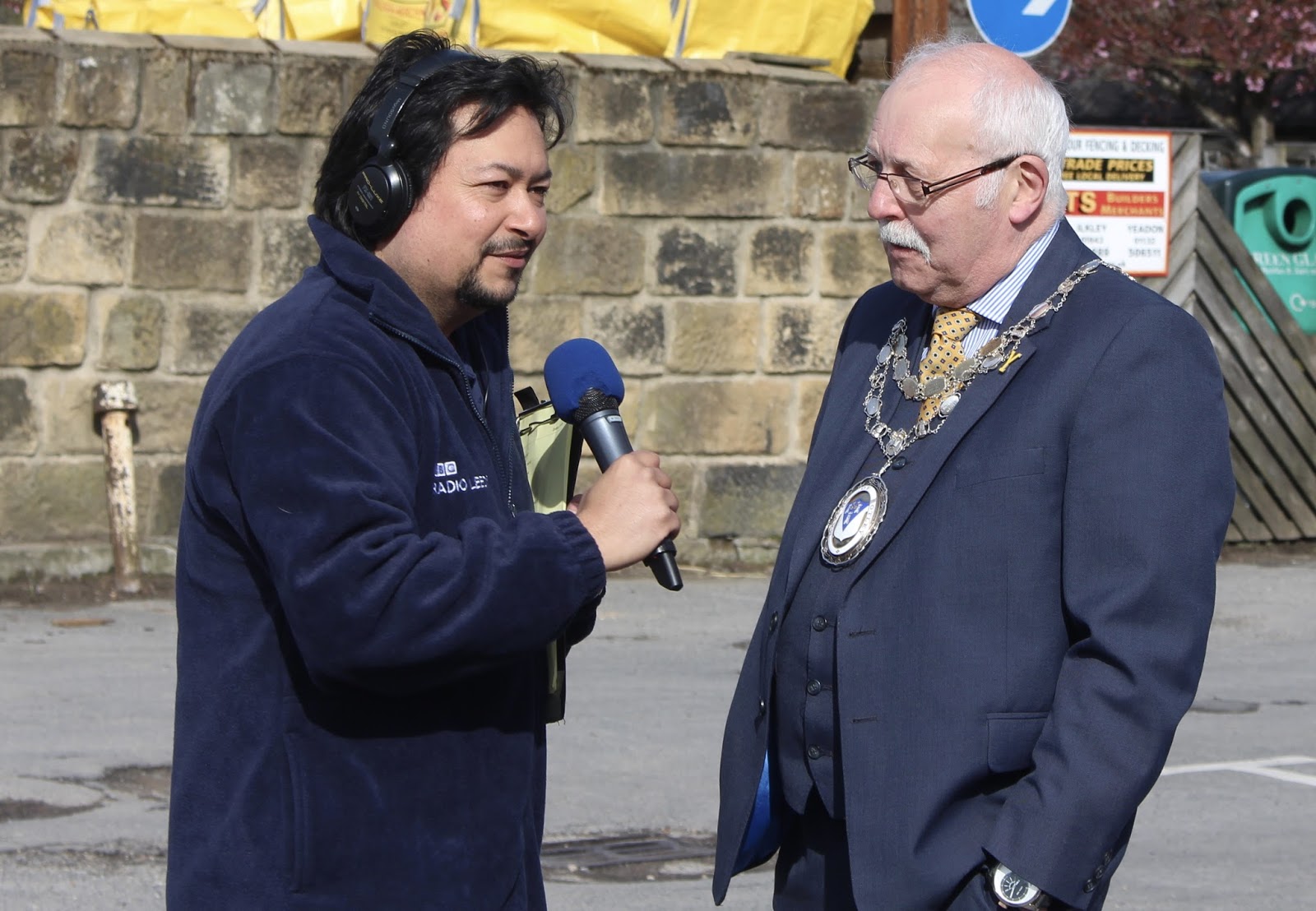 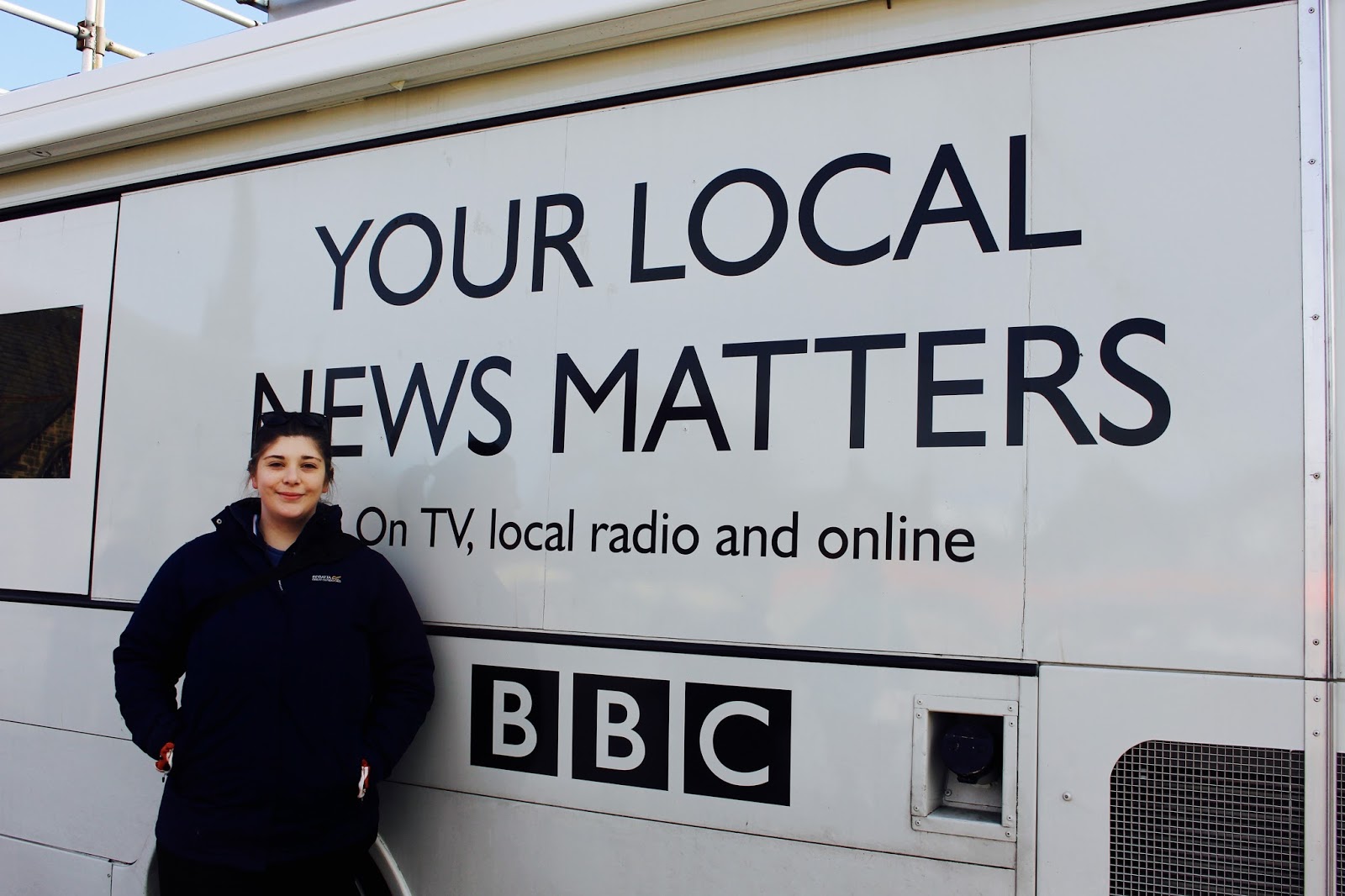 Overall, I had a great morning at the womens race. It was really quite brilliant to be there documenting this race that is hopefully going to set a trend in womens cycling! Hopefully from now on the big races will offer the same money and the same challenges and media coverage as the mens race because these women are phenomenal athletes!

Mens race photos and a vlog will be coming soon!